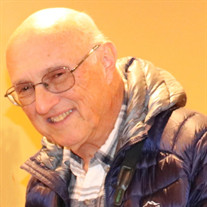 Robert “Bob” Franklin Ringler passed away on February 15th, 2022. He was 76 years old. Bob was an only child, born in Michigan on January 14th, 1946 to the late Jackson Franklin Ringler and the late Julia Clara Ringler. Growing up Bob was lovingly called Bobby by family and friends. He was active in Cub scouts, Little League Baseball, and anything outdoors. His father introduced him to birding at an early age, shadowing his impeccable note-taking skills, detailing all the birds they had seen and photographed. Bob enjoyed watching Sunday football games with family and friends. He was a quiet man of few words, but when he spoke it was always something intelligent and witty. Bob had a love for dogs; Cindy and Skippy were often seen walking by his side. Bob was a world traveler, organizing and leading tours to numerous destinations across the US and overseas. One of his favorite locations was Costa Rica. On any given day you could find Bob walking outside with his binoculars or listening to jazz music while documenting bird data. After graduating from Severna Park High School, Bob went on to receive his Bachelor’s degree from Drexel University. His first job was working for DuPont in Seaford, Delaware. Then he went to work with Swanson Foods in Salisbury, Maryland. A very intelligent man, he retired as an analytical chemist from The Maryland Department of Health and Hygiene. He worked with the Chesapeake Bay and monitored water quality. He appreciated the marvelous gifts of the Chesapeake Bay and Maryland’s extraordinary wild bird species. Bob enjoyed the “three B’s” Birding, Butterflying, and Botanizing. His passion and love for birding became more than a hobby. He had such a strong appreciation and respect for nature. He joined the Maryland Ornithological Society (MOS) in 1975 and served as President from 1988-1989. He was a member and President of the Baltimore Bird Club and the Carroll County Bird Club. He was an Associate Editor of Maryland Birdlife. Bob is considered to be one of the founders of the Breeding Bird Atlas Project. He was a compiler and editor of the “The Season” report in Maryland Birdlife. Bob served on numerous project committees and was a lead author in the Third Edition of the Field List of the Birds of Maryland. “Before we had eBird, we had Bob Ringler. Bob is best remembered for his encyclopedic knowledge of bird distribution and populations in Maryland and DC. He was equally known as a meticulous record-keeper, and took the trouble to enter every one of his sightings into eBird. Bob was well-liked because of his kindness and patience. He loved sharing his knowledge of birding to all who were willing to ask and listen.” He is survived by his cousins; Faith Ringler-Stevinson (Walter) of Maryland, Jay Anthony of Florida, Patrick Buckley (Betty) of Minnesota, David Buckley (Nancy) of Iowa, Paul Buckley (Connie) of Iowa and Sharon Edmunds of Florida. Also surviving are his great nieces, Adrienne Dilaimy (Fabian) of Maryland, Melanie Brown (John) of Maryland, and Roxy Anthony of Maryland. A celebration of life will be held at a future date. In lieu of flowers, contributions can be made to Maryland Ornithological Society. https://mdbirds.org/donate/.

Robert &#8220;Bob&#8221; Franklin Ringler passed away on February 15th, 2022. He was 76 years old. Bob was an only child, born in Michigan on January 14th, 1946 to the late Jackson Franklin Ringler and the late Julia Clara Ringler. Growing... View Obituary & Service Information

The family of Robert Franklin Ringler created this Life Tributes page to make it easy to share your memories.

Send flowers to the Ringler family.