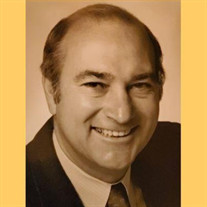 William Hopkins Larrimore, Jr. passed away suddenly in Georgetown, DE on March 30, 2021. He was 86. Born on a farm in Price, Maryland on March 22, 1935 to William Hopkins Sr. and Mary Plummer Larrimore. He was raised on their farm in Church Hill, MD and attended school in Church Hill and later graduated from Centreville High School in 1953. While there he excelled in several sports, especially in baseball. After graduation he enlisted in the Marine Corps, serving with the 2nd Marine Air Wing on the East Coast and then on to Korea and Japan. He was honorably discharged at the rank of Sergeant in 1957 and attended the University of Maryland. He moved to Wilmington, DE, met and married Betty Lou McCann. He began his career in sales and marketing with Keebler Biscuit Company. While working in the food business he was promoted and transferred to Syracuse, NY. A few years later he decided to join the growing wine industry and was hired as Upstate Sales Manager for Dreyfus Ashby Importers. In 1976 at their annual Sales Convention he was awarded the company's Man of the Year award for his accomplishments in upstate NY. In 1982 once again he was transferred to California as Western Regional Manager for Dreyfus Ashby Importers. Later in Agoura Hills, California he purchased a ServiceMaster franchise and built the business into a successful operation. Retiring in 1996, he and Betty moved to Aiken, SC. In 2004, they moved to Spruce Creek CC in Summerfield, FL. He was an avid golfer and enjoyed, not only the game, but memories and many friends he met along the way. He enjoyed following all sports, especially ice hockey, reading and also doing volunteer work. In 2013, they relocated to The Village of Cinderberry in Georgetown, DE. He is survived by his wife of 62 years Betty, son Daniel and son-in-law Howard Merritt of Fort Lauderdale, FL, his brother-in-law M. Rogers Smith of Chestertown, MD and many nieces and nephews. He was predeceased by his sister Bette L. Smith. A service will be held on Wednesday, April 7, 2021 at noon at the Fellows, Helfenbein & Newnam Funeral Home, P.A. in Centreville, MD, where friends and family may visit beginning at 11 am. Burial will follow in Chesterfield Cemetery in Centreville, MD. In lieu of flowers contributions may be made to: (checks payable to) Georgetown Junior Police Academy Fund 335 N. Race St. Georgetown, DE 19947 Grace United Methodist Church, Millsboro DE www.gracechurchmillsboro.com or the charitable organization of your choice.

William Hopkins Larrimore, Jr. passed away suddenly in Georgetown, DE on March 30, 2021. He was 86. Born on a farm in Price, Maryland on March 22, 1935 to William Hopkins Sr. and Mary Plummer Larrimore. He was raised on their farm in Church... View Obituary & Service Information

The family of Mr. William Hopkins Larrimore Jr. created this Life Tributes page to make it easy to share your memories.

Send flowers to the Larrimore family.