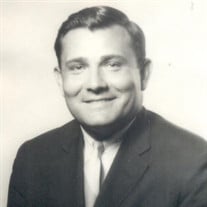 Walter Sammons Howard, Jr. was born September 5, 1935 in Milford, DE to the late Mildred Tyndall and Walter S. Howard. He attended Lewes High School and later Fork Union Military Academy in Virginia, where he became Battalion Major. He then attended Braden’s Prep School preparing him to enter West Point. His preparation was shortened due to Governor Boggs honoring him with an apprentice pilot position in Lewes, DE. This position became a career for him as a Delaware Bay and River (ship) Pilot. He was proud to be in charge of the renovation of the Pilot Station in Lewes. In November of 1998, after 44 years of service, he retired. When the Howards moved from Mendenhall, PA to the Eastern Shore of Maryland in 1985, Mr. Howard was able to enjoy his hobbies which included fishing and traveling. He was a member of the Masons (Jefferson Lodge #15) and the Nanticoke River Yacht Club. He is survived by his son, Walter S. “Sam” Howard III (Melissa), his daughter, Sandra Logan Howard; one brother Charles Howard; five grandchildren: Walter S. “Chip” Howard IV (Courtney), Katie Hood (Andy), Michael Britts, Laura Jane Fridley, Stephen Britts (Kaitlin); nieces and nephews: Cindi, Karla, Chuck, Glen, and Lisa; and five great grandchildren: Henry, Norah, Symmes, W.S.Howard V “Quinn”, and Ellie Logan. He was predeceased by his wife, Janie Sheridan Howard in 2004, whom he married on September 21, 1967. The family would like to extend its deepest gratitude to friends, neighbors, and caregivers for their love and support. Special thanks to the staffs at The Village at Gordon House and Hospice of the Piedmont. In lieu of flowers donations may be made to Fork Union Military Academy in memory of Walt (class of ’53) or to Hospice of the Piedmont. Arrangements are being handled by: Fellows, Helfenbein & Newnam (Easton, MD). For condolences and to sign the online guest book, please visit www.fhnfuneralhome.com. The visitation will be at 10 a.m. on Saturday, August 28 at the funeral home (200 S. Harrison Easton, MD.) followed by the service at 11 a.m.

The family of Walter Sammons Howard Jr created this Life Tributes page to make it easy to share your memories.

Send flowers to the Howard family.