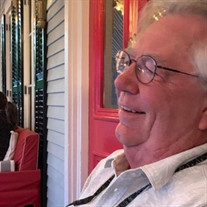 Scott Dodd Hammersley, of Stevensville, MD died at his home on November 16, 2020 at the age of 63. He was born on December 24, 1956 in Alexandria, VA. Raised by his mother, Helena Francis (Shook) Hammersley, he was a lifelong resident of Virginia until recently moving to Cove Creek Club, Maryland where he could enjoy the beautiful sunrises and sunsets over the Chesapeake Bay. His intentions for retirement were to enjoy boating on the bay, and spending some of the winters in the Florida Keys. Scott was known for his incredible sense of humor and gift to make people laugh. He loved having friends and family around him, enjoying great food, good wine and loving company. Finding an early interest in music, Scott played the blues harp in his late teens and then turned his interest towards guitar. He became a local name in Rock and Roll and was seen often performing in clubs around the Washington DC area, Richmond and Colonial Beach. His love of music and his ability to “drop them to their knees” persisted until his death. Scott was a self made man working his was up in the commercial construction industry, from driver to executive. Ultimately, he helped pioneer the success of Newington Concrete and New Rock Materials to be the largest privately owned Ready Mix Concrete provider in Virginia. His bragging book included the construction of the new Woodrow Wilson Bridge, the Springfield Mixing Bowl Interchange and the Pentagon repair post 9/11. His success lead to a sale of the company and he was able to retire in 2006. Scott is survived by his wife, Ivy Avila; daughters, Megan Wade (Aaron) of Annapolis, MD, Linsey Hammersley of Fredericksburg, VA; Stepson, Nicholas Jones of Vienna, VA; sisters, Patsy Mankin and Gwen Redcorn, and 3 grandchildren, Camden, Blake and Archer Wade Donations may be made in his honor to https://hungryformusic.org. A celebration of life is being planned for late spring.

Scott Dodd Hammersley, of Stevensville, MD died at his home on November 16, 2020 at the age of 63. He was born on December 24, 1956 in Alexandria, VA. Raised by his mother, Helena Francis (Shook) Hammersley, he was a lifelong resident of... View Obituary & Service Information

The family of Scott Dodd Hammersley created this Life Tributes page to make it easy to share your memories.

Scott Dodd Hammersley, of Stevensville, MD died at his home on...

Send flowers to the Hammersley family.