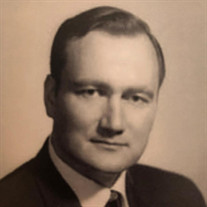 Robert “Bob” Anthony Pascal died peacefully, surrounded by loved ones at his home in Easton, MD on March 12, 2021. His legacy reflects his lifelong commitment to education, sports, politics, business, philanthropy and most importantly, family. Bob was born on July 20, 1934 in Glen Ridge, NJ, the son of Anthony Pascal and Mildred Bonavita Pascal. He attended Bloomfield High School where he enjoyed notoriety as a star football, basketball, and baseball athlete. Upon graduation, Bob attended Duke University on a football scholarship where he was named team MVP in 1955 after Duke won the Orange Bowl. He graduated in 1956 with a B.A. in Economics and began his successful career and wide-ranging endeavors. After a stint playing for the Canadian Football League, Bob moved to Maryland where he owned a successful propane business that was one of the top 50 retail propane companies in the country. His passion to improve his community began as a Boy Scout leader and Little League coach and led to his service to the state of Maryland as a Maryland State Senator, Anne Arundel County Executive, and Secretary of Appointments to Governor William Donald Schaefer. Bob’s entrepreneurial spirit led to several successful commercial development projects in Baltimore, Severna Park, Kent Island and Maryland’s Eastern Shore including the Baltimore Inner Harbor and several landmark establishments in Talbot County, one of which was the St. Michaels Harbour Inn and Marina. Ever the athlete and sportsman, Bob’s enjoyment of hunting and fishing on the rural Eastern Shore eventually evolved to the role of wildlife and land conservationist. In 2010, he purchased the Jean Ellen du Pont Shehan Audubon Sanctuary; 1,000 acres of prime waterfront property in Talbot County, which was donated as conservation easement to the Maryland Dept. of Natural Resources and placed in trust for perpetual preservation. His expansive philanthropic efforts included the indoor practice field at Duke University named the Pascal Field House. The Robin Elizabeth Pascal Women’s Center at the University of Maryland Medical Center is named for his late daughter. His generosity extended to include Johns Hopkins Medical Center, the University of Maryland Medical Center, Anne Arundel County Senior Center, Pascal Youth & Family Services in Severna Park, Ronald McDonald House in Baltimore, 288-acre Kinder Farm Park in Anne Arundel County, St. Mary’s School, several scholarship funds, and many other local charities. In his later years, Bob treasured the opportunities to enjoy the awesome natural world around him, especially with his extended family. Each Thanksgiving over 50 loved ones gathered at his farm to celebrate with one another and to give thanks for their many blessings. Bob is survived by his loving and devoted wife Susan Check Pascal, daughters Cathy Pascal Strom (Ron) of Chapel Hill, NC, Margaret Pascal of Phoenix, MD, Clara Jane Pascal of Coral Gables, FL, sister Jane Pascal Shaheen (Hank) of Rumson, NJ, sister-in-law Judy Pascal of Easton, MD; eleven grandchildren, eleven great-grandchildren, many nephews and nieces, and former wife Nancy Ware Pascal Wainwright. Also saddened by Bob’s absence are his three hunting Labrador Retrievers. Bob is predeceased by his parents, Anthony and Mildred Pascal, daughter Robin Pascal, and brother Anthony Pascal. Funeral services will be private, though it is hoped that as conditions allow, there will be a celebration of Bob’s remarkable life with family and friends later this year. In lieu of flowers, memorial contributions may be made to Talbot Hospice Foundation (TalbotHospice.org), 586 Cynwood Dr., Easton, MD 21601 or the St. Michaels Food Pantry, P.O. Box S, St. Michaels, MD 21663.

The family of Robert Anthony Pascal created this Life Tributes page to make it easy to share your memories.

Send flowers to the Pascal family.