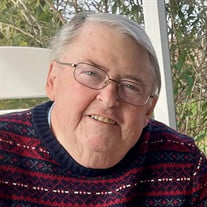 Robert Joseph Hooker, Jr., of Easton, Maryland, passed away surrounded by his loving immediate family on Thursday, February 3, 2022 at the age of 71 at the University of Maryland Shore Medical Center. “Bob” was born in Cambridge, Massachusetts on February 25, 1950 to Mary Francis Hooker (Mahler) and Robert Joseph Hooker, Sr. Growing up, he enjoyed playing baseball and football, and he often talked fondly of his trips to Boy Scout camp. Bob spent over 30 years working for Star Market in Massachusetts, many of those years as a Store and District Manager, where he referred to himself as “The Michael Jordan of supermarket managers”. Bob raised his family in Norfolk, Massachusetts, spending family time at homes in Quechee, Vermont and Cape Cod. Known for his humor, quick wit, and quiet generosity, Bob had many close friends, family, and colleagues who supported and laughed with him over the years. He looked forward to his frequent calls with family, and lifelong friends Tom, Sally, and “Bo”, to name a few. His biggest treasure was his loving wife of 47 years, his “Lovely Lorraine”, and the life they built together. He spent his retired years in the welcoming community of Easton, Maryland to be closer to his children, Joe and Kristen, and his grandchildren. Affectionately known as “Pa”, he was very close to his grandchildren Nathan, Ryan, and Jacqueline, and was proud of their accomplishments. He enjoyed fishing and golfing because he shared these activities with family. Bob and Lorraine enjoyed traveling, often returning home to New England to spend time with his family and friends. Known as “Bobby” to Lorraine’s family, they also held a special place in his heart. Bob is survived by his beloved wife, Lorraine Marie Hooker (Hucksam); his children Joseph Robert Hooker (spouse Jennifer Mahat Hooker) of Oakton, Virginia; Kristen Marie Stovall (spouse Phillip Spencer Stovall) of St. Michaels, Maryland; grandchildren Nathan Alexander Stovall, Ryan Joseph Hooker, and Jacqueline Victoria Hooker; and siblings Mary Jane Toolan of North Andover, Massachusetts and Jacquelyn Mara of Bedford, New Hampshire and their families; and predeceased by his sister Eleanor Hooker. As Bob would say, he did pretty well for a “non-steno kid”. He will be greatly missed. A Celebration of Life is being scheduled for later this year.

Robert Joseph Hooker, Jr., of Easton, Maryland, passed away surrounded by his loving immediate family on Thursday, February 3, 2022 at the age of 71 at the University of Maryland Shore Medical Center. &#8220;Bob&#8221; was born in Cambridge,... View Obituary & Service Information

The family of Robert Joseph Hooker created this Life Tributes page to make it easy to share your memories.

Send flowers to the Hooker family.