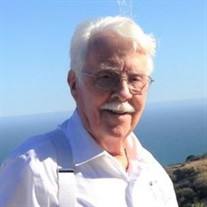 Richard Pendleton passed away on February 28, 2021 at Bayleigh Chase in Easton. He was 87. Richard Pendleton was born on April 24, 1933 to Jere Pendleton and Viola Smith in Union Springs, New York. Raised in New England, he graduated from South Lancaster Academy, Massachusetts in 1952, from Southern Adventist University, Tennessee in 1963 with a Bachelor of Science in Nursing. He received his training in anesthesia at St. Vincent's Hospital, Worcester, Massachusetts, in 1965. Prior to his nursing training, Richard served in the U.S. Army for two years in Germany as a medic/ambulance driver. In that brief stint he picked up conversational German. He practiced it on just about every German tourist he encountered visiting Hawaii. Having served in the US Public Health service in the South Pacific, it was a natural transition to be an anesthetist (CRNA) for over 30 years in Hawaii, working most of that time at Castle Medical Center in Kailua, Hawaii. While Richard made his living as a nurse anesthetist, he was a finish carpenter and truly loved making things with his hands. He took pride in building homes for families in Massachusetts and Florida as well as custom interiors in Hawaii. He was happiest creating beauty in wood with tools. He was a lifelong member of the Seventh-day Adventist church, and served as an elder in Grasonville SDA church until his health declined. He had a rich tenor voice and sang praises to the Lord in worship services across Hawaii and everywhere he lived. He is survived by Marjorie Pendleton, his wife of 15 years, his son Roy Pendleton and (grandchildren Elena Fender (Jordan), Carlin Pendleton), daughter Ronna Leigh Slongwhite (Wayne) and (grandchildren Lenchen Slongwhite, Kama Hamel), stepson David Pendleton (Noemi) and (grandchildren Roland, Raquelle, Danielle, and David II), and stepson, John Pendleton (Trini), and (grandchildren Maile and Lilia), and Devyn Slongwhite, McKaelyn Fisher. Memorial services will be held in the Grasonville SDA Church, 205 Medical Drive, Grasonville, MD on Sunday, March 7 at 2 PM. It will be live streamed on Facebook and YouTube.

Richard Pendleton passed away on February 28, 2021 at Bayleigh Chase in Easton. He was 87. Richard Pendleton was born on April 24, 1933 to Jere Pendleton and Viola Smith in Union Springs, New York. Raised in New England, he graduated from South... View Obituary & Service Information

The family of Richard Pendleton created this Life Tributes page to make it easy to share your memories.

Richard Pendleton passed away on February 28, 2021 at Bayleigh...

Send flowers to the Pendleton family.