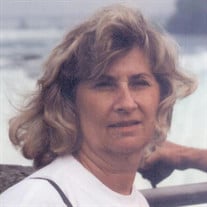 Peggy Joyce Wright of Preston, MD died on October 28, 2021. She was 80. Born in Greenbelt, MD on March 27, 1941, she was the daughter of the late Harvey and Edna Cox Wharton. After graduating from Preston High School, she married Robert “Bobby” Wright on June 10, 1961. Peggy spent her working days as a Cafeteria Manager, but her love of cooking and baking extended to her family and friends as well. She and Bobby enjoyed spending time with their close friends during their many trips, dinners, card nights and parties. Peggy also enjoyed shopping trips with the girls. She cherished the time she spent with her family, including her sons, daughter’s in-law, grandchildren, great-grandchildren, nieces, and nephews. She was a member of the Community Club of Preston. Peggy is survived by her sons, Mark Alan Wright (Melinda) and Gregory Scott Wright (Kimberly), all of Preston; her grandchildren: Chad Wright of Denton, MD, Zachary Wright of Preston, Kasey Wright of Preston, Brielle Wright, Morgan Wright, and Logan Wright. She is preceded in death by her beloved husband, Bobby Wright; and a sister, Dorothy “Dotty” Wright. Friends and family may visit from 11:30 am – 12: 30 pm on Friday, November 5 at the Fellows, Helfenbein & Newnam Funeral Home in Easton, MD. A graveside service will follow at 1 pm at the Maryland Eastern Shore Veterans Cemetery in Hurlock, MD. Memorial contributions may be made to the Community Club of Preston, PO Box 4, Preston, MD 21655.

The family of Peggy Wright created this Life Tributes page to make it easy to share your memories.

Send flowers to the Wright family.