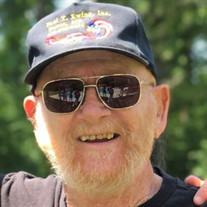 Paul T. Ewing, Jr., of Easton, passed away peacefully at home on March 15th, 2022. He was 77. He was born on August 24, 1944 in Cambridge to the late Paul T., Sr. and Dorothy Fischer Ewing. He attended Sts. Peter and Paul elementary and gave the nuns a lot to pray for over the years. After sampling both Easton High and Sts. Peter and & Paul, Paul graduated and joined the United States Army in 1964. Military life required precision, toughness and a desire to do things the right way, and only the right way. It fit perfectly with his personality. He served in the 8th signal battalion in Bad Kreuznach, Germany where he was a linesman. After his honorable discharge as a Sergeant in 1967 he worked for C&P Telephone, where he met his future wife, Ruth, a phone operator. They married in 1969 and were blessed with two children, Tyler and Pam. Paul later joined his father Paul Sr. in the sand and gravel business and created what would become Paul T. Ewing Inc., a family business that continues to this day 46 years strong. Described by many as a “character” he had red hair and the passionate temperament to match. He was a driven man, a hard worker and appreciated a job well done. Not one to espouse flattery, if he gave you a compliment it was well deserved. “Pretty work” was the ultimate compliment. He valued hard work, working hard, and more work. He had no time for excuses or fibs, he firmly believed that you are in charge of yourself and what you can accomplish. Anything that he set his mind to do, he accomplished. He obtained his private pilot’s license in 1980 and was especially proud of getting his instrument rating. If it had an engine, he could run it. If something was broken, he would take it apart and do his darndest to fix it, much to the chagrin of the person in charge of holding the flashlight. There is nothing he loved more than being on his Harley riding with the guys, flying to get lunch at a nearby airport or boating with his friends calling off the stern, “heeerrre fishy, fishy, fishy!” Family potlucks with all the fixins and having the family all together meant a lot to him. After retirement he could be seen single handedly taking care of his yard, pruning his rose bushes and yelling at the dog to get out of the flowers. His favorite ways to pass his days were polishing his chrome, crabbing off the dock, eating junk food and watching Westerns . A Dairy Queen strawberry milkshake was his favorite, but god help you if you added whipped cream to it! He loved his German Shepherds, having had Patches 1, Patches 2, Patches 3 and Patches 4 as faithful companions over the years. Paul is survived by his loving wife, Ruth of 52 years; daughter, Pam Andrews and her husband, Charlie; and grandchildren, Tucker, Avery and Kate Andrews and Kristen Kelley. He is also survived by his sisters, Joan Hurley (Willey), Patricia Bilbrough (Lewis), Dorothy Walker (Mike), and Carol Prettyman (Keith) and many nieces and nephews whose shoes he has stolen over the years. Paul is predeceased by his son, Thomas Tyler Ewing. A Celebration of Life will be held at the Real Life Chapel, 418 Glebe Road, Easton, MD on Saturday, March 26th at 11am followed by a luncheon of Paul’s favorites. If you would like to join a hot rod & motorcycle memorial ride to the church, please meet at Paul T. Ewing Inc. at 10am. Casual dress. Motorcycle horned helmets encouraged. For those wishing to make a donation in Paul’s memory, you are encouraged to do so to Talbot Humane Society, P.O. Box 1143 Easton, MD 21601 www.talbothumane.org or ABATE of MD Inc., 1035 Damsontown Rd. Queen Anne, MD 21657

Paul T. Ewing, Jr., of Easton, passed away peacefully at home on March 15th, 2022. He was 77. He was born on August 24, 1944 in Cambridge to the late Paul T., Sr. and Dorothy Fischer Ewing. He attended Sts. Peter and Paul elementary and gave... View Obituary & Service Information

The family of Paul T. Ewing Jr. created this Life Tributes page to make it easy to share your memories.

Send flowers to the Ewing family.