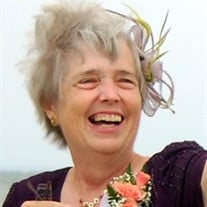 Patricia “Pat” Worthington passed away peacefully at her home in Wallingford, PA on January 9, 2022, with her faithful dog, Treasure, nearby. She was 75. Pat attended Friends School in Baltimore City, then earned her Bachelor’s degree at Hollins University in Roanoke, VA before completing her Master’s degree in Sociology from the University of Connecticut. She developed a love of travel while studying abroad in France. Pat had a two-pronged career in the financial services business. First from 1972 through 1995, Pat was a pioneer among women as the 4th female vice president at Provident National Bank (later PNC Bank). She managed a number of areas during her tenure including Wire Transfer, Cash Management, Demand Deposit Account Manager, Provident's payroll processing company, Provcor, and Consumer Lending Technology. After leaving PNC, Pat took the opportunity to travel around the world, taking in the cultures of Ireland, Nepal, China, and India. She then joined the Vanguard Group where she had a 10-year career before retiring in 2008. At Vanguard she enjoyed a number of management positions, her favorite of which was a long-term project where she managed a group of free-lance writers charged with re-writing operational procedures for the organization. Throughout her life, Pat raised several Curly-Coated Retrievers, and she attended dog shows, took classes, and connected with other dog-lovers everywhere she went. Pat was devoted to family genealogy research, carrying on the legacy of her aunt Grace Zumstein Hoster by serving as the historian of the Bowers Family Reunion in Westminster, MD into its 75th year. Pat loved flowers and frequented the Philadelphia Flower Show, in addition to tending to her own garden. Pat was an avid reader and enjoyed discussions with her long-running local book club of close friends. Her love of stories also often took her to the National Storytelling Festival in Tennesee and other events around the country. She played an incredibly special part in the lives of her brother’s two children, in whom she instilled her curiosity about the world. She included them in her travel adventures, whisking her young nephew away to dude ranches in Montana and Wyoming and escorting her niece on a journey to New Zealand. Pat was predeceased by her parents, Jane White (nay Zumstein) Koenig and Henry A. Koenig III, who passed away in 1976 and 1995, respectively. She is survived by her brother, Henry A. Koenig IV and his wife Julie of Berlin, MD, nephew Lucas Koenig of Ocean Pines, MD, and niece Lindsay Koenig Beaucar, her husband David, and their daughter Margot of Baltimore. Pat also leaves behind several dear friends including Marion Gerner, Ellen McLaughlin, and lifelong friend Anne Nicholls Haendiges. Services will be held on Sunday, January 16th, 2022, at 2pm at Fellows, Helfenbein & Newnam Funeral Home, Easton. Friends may call one-hour before, from 1-2pm. Interment will follow at White Marsh Cemetery, Trappe. The family asks that in lieu of flowers, donations in her memory sent to the Curly Coated Retriever Club of America, Rescue Fund, c/o Andy Ayers, 510 W. Harrison Street, Maumee, OH 43537-2026, or your local Humane Society. The family kindly asks that all guests wear a mask while attending services.

Patricia &#8220;Pat&#8221; Worthington passed away peacefully at her home in Wallingford, PA on January 9, 2022, with her faithful dog, Treasure, nearby. She was 75. Pat attended Friends School in Baltimore City, then earned her Bachelor&#8217;s... View Obituary & Service Information

The family of Patricia Koenig Worthington created this Life Tributes page to make it easy to share your memories.

Patricia “Pat” Worthington passed away peacefully at her home...

Send flowers to the Worthington family.