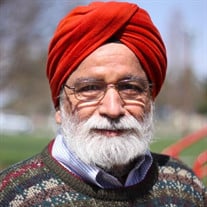 Our beloved Paramjit Singh passed away on Sunday February 13th at 2:47 a.m. He was a loving husband, father, grandfather, brother, uncle and friend and we all adored him. He was a brave man for immigrating to the US in 1969, recently married... View Obituary & Service Information

The family of Paramjit Singh created this Life Tributes page to make it easy to share your memories.

Our beloved Paramjit Singh passed away on Sunday February 13th...

Send flowers to the Singh family.