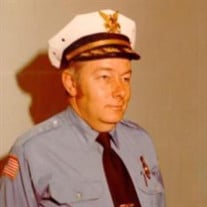 Norris “Jack” Arment, Jr., 86, of Crescent, a dedicated Fire Chief, mentor/instructor to new fire fighters and community leader, passed away peacefully on Tuesday, November 16, 2021, at Good Samaritan Hospice House. Jack was born in Betterton, MD on April 13, 1935, one of two sons born to the late Nettie Marie (Urie) and Norris L. Arment, Sr. On June 23, 2017, he was preceded in death by his beloved wife of 55 years, Marian A. (Stortecky) Arment. In addition to his wife and parents, he was preceded in death by his brother Franklin Brice Arment. Jack was a 1953 graduate of Chestertown High School, Chestertown, MD, served in the Betterton Fire Department and served his country in the U.S. Army 1958-1960. A machinist for 22 years, he retired from the Dravo Corporation in 1983. He was a member of St. Joseph Church and a 32nd Degree Mason of F & AM Doric Lodge. Since 1966, he had been a member of Crescent Volunteer Fire Department and was the longest serving Fire Chief of the history of the Company. His experience was so vast that the new chief and company elected him chief engineer for the fire department. He was a longtime trustee for Crescent Volunteer Fire Department also instructed drivers. He is survived by his sister-in-law Joan (Bob) Geis; brother-in-law David (Donna) Stortecky; sister-in-law Carol (Hal) Dunham; also, many loving nieces and nephews, aunts, uncles, cousins, friends, and his fellow brothers at the Crescent Volunteer Fire Department. Visitation Friday 4-8 PM with Fireman’s Service at 7 PM at Crescent Fire Volunteer Fire Department, McGovern Blvd., 79 McGovern Blvd., Crescent, PA 15046, where Blessing Service will be held on Saturday at 9:30 AM. Burial will follow at Resurrection Cemetery with military honors. In lieu of flowers, please consider a donation in his name to the Crescent Volunteer Fire Department. In order to view Mr. Arment's service held at Copeland Funeral home, visithttps://www.copelandfuneralhomes.com/obituary/NorrisJack-ArmentJr.

The family of Norris Jack Arment Jr. created this Life Tributes page to make it easy to share your memories.

Send flowers to the Arment family.