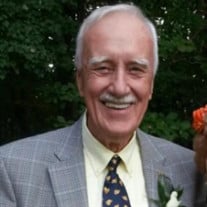 Michael Joseph Ambrose passed away peacefully, surrounded by immediate family on April 14, 2021 at his home in Chestertown, MD. He was born on August 3, 1937 in New York, the son of Michael Ambrose and Estelle Krzeminski. Mike graduated from Regis High School in New York City in 1955. He earned a bachelor’s degree in Mechanical Engineering from the College of the Holy Cross in Worcester, MA on a Navy ROTC scholarship. He served on the USS Boston and USS Long Beach as an officer in the United States Navy. After completing his active duty commitment, he had a successful career as an award-winning engineer for Westinghouse and Northrop Grumman. He earned a Master’s in Physics from Drexel University in Philadelphia, PA during this time and remained an active member of the American Society of Mechanical Engineers. He continued to serve as a Navy Reservist, retiring as a Captain in 1989 after 30 years of honorable service. Mike married the love of his life, Patricia Ambrose, in 1961. They raised their family of four daughters while residing in Woodbury, NJ and Millersville, MD before joining the Chestertown, MD community in 2018. Devoted to his Catholic faith, Mike was an active member of St. John the Evangelist parish in Severna Park for 33 years and most recently with Sacred Heart Catholic Church in Chestertown. He enjoyed working on his cars, spending time outdoors, and traveling. A devoted husband, father, grandfather, and great-grandfather, Mike was fiercely committed to family and especially adored his wife, Trish. He took great pride in his four daughters, and celebrated their ever-growing families. In addition to his wife, Mike is survived by his daughters, Anne Powers (Garry) of Camden, DE; Beth Hinds (John) of Roswell, GA; Jennifer Costanzo (Lou) of Chestertown, MD; and Megan Furlano (Brian) of Westmont, NJ; his sister, Estelle Buccino of Baltimore, MD; brother, Paul Ambrose (Barbara) of Edison, NJ; as well as twelve grandchildren and two great-grandchildren, plus a third on the way. He was preceded in death by his parents, Michael and Estelle Ambrose; and most recently his sister Carol Arras, Wheaton, MD; brother Robert Ambrose, Rego Park, NY; and sister-in-law Regina Cebulski, Trumbull, CT. In lieu of flowers, donations can be made in Mike's name to College of the Holy Cross in Worcester, MA at https://www.holycross.edu/alumni/support/ways-give A public visitation will be held at Fellows, Helfenbein, and Newnam Funeral Home in Chestertown on Friday, April 16 from 7:00 pm – 9:00 pm. Funeral services will be held at Sacred Heart Catholic Church on Saturday, April 17 at 11:00 am. Arrangements by Fellows, Helfenbein, and Newnam Funeral Home www.fhnfuneralhome.com

Michael Joseph Ambrose passed away peacefully, surrounded by immediate family on April 14, 2021 at his home in Chestertown, MD. He was born on August 3, 1937 in New York, the son of Michael Ambrose and Estelle Krzeminski. Mike graduated from... View Obituary & Service Information

The family of Michael Joseph Ambrose created this Life Tributes page to make it easy to share your memories.

Send flowers to the Ambrose family.