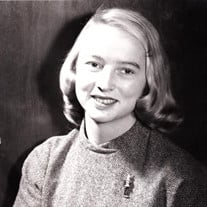 Mary Stuart Uhl, affectionately known as “Goonie,” died at Easton Memorial Hospital in Easton, Maryland, on March 5, 2022. Born on December 23, 1928, in Hagerstown, Maryland, she was the daughter of the late Lynn K. Brugh, Jr. and Mary DeBretagne Stuart. She was preceded in death by her husband, Edward G. Uhl on May 9, 2010. Mary Stuart was a graduate of the Warrenton Country School in Warrenton, Virginia, and attended Barmore College in New York City. She worked as Executive Assistant to the President of Fairchild Engine and Airplane Corporation in Hagerstown, Maryland, and was the first female member of the Board of Trustees of Saint James School in Hagerstown, Maryland. She was also a Trustee of the Washington County Museum of Fine Arts which was donated to the citizens of that county by her Great-Aunt Anna Brugh Singer and Great-Uncle William H. Singer, Jr. who was a renowned impressionist painter. She was a member of Christ Episcopal Church in Easton, Maryland, where for many years she helped organize the church’s spring and fall rummage sales and was a longtime volunteer at the Academy Art Museum. She is survived by two sons, two stepsons, one stepdaughter, several grandchildren and step-grandchildren, and one great grandchild. One grandchild, Mary Anne Hatcher, preceded her in death on November 15, 1993. Burial will be at St. Mark’s Episcopal Church cemetery near St. James, Maryland, at the convenience of the family. In lieu of flowers, memorial donations may be made to the Mary Anne Hatcher Award, Saint James School, 17641 College Road, Hagerstown, Maryland 21740.

The family of Mary Stuart Uhl created this Life Tributes page to make it easy to share your memories.

Send flowers to the Uhl family.