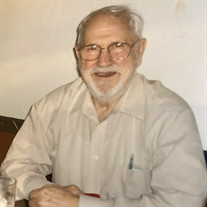 Marion Milton Ireland, Jr. of Chestertown, Maryland went to his heavenly home on March 12, 2021 while at home. He was 90 years old. Marion was born on June 15, 1930 the son of the late Marion Milton and Nellie Jacobs Ireland. His love of family and strong work ethic led him to begin working at the young age of 9 in a grocery store in Fairlee. Marion was a graduate from Chestertown High School as well as Goldey-Beacom College in Baltimore. He also served as a Corporal E-4 in the United States Marine Corps from 1951 to 1959, where he received several service medals. He married the love of his life, Marilyn Fletcher, on December 31st, 1954. Marion was the owner and operator of several service stations, however his love of business took him to Eastern Neck Wildlife Refuge, where he began his career with the Department of the Interior, U.S. Fish and Wildlife Service. His successful profession carried him to Boston, Massachusetts, residing in Nashua, New Hampshire. Marion retired in 1992 and moved back to Kent County. His deep devotion to his family gave him decades of profound joy. The valued time spent with all of the children, grandchildren, and great-grandchildren created a bond that will be forever cherished. Marion was a member of the Salem United Methodist Church and the Betterton American Legion. Marion was preceded in death by his wife, Marilyn, and son, Chip. He is survived by his daughters, Donna Scott and husband Norman of Chestertown, Linda Whitaker and husband Brian of Chestertown, and daughter-in-law Mary Ireland of Chestertown; one sister, Katherine “Kitty” Doll; eight grandchildren, and thirteen great-grandchildren. Services will be held at Fellows, Helfenbein, and Newnam Funeral Home in Chestertown on Friday, March 19th at 11:00 am with interment to follow at Chester Cemetery. Calling time for friends and family will be held on Thursday, March 18th from 6:00 pm – 8:00 pm. In lieu of flowers, the family has asked that donations be made in Marion’s name to Compass Regional Hospice at 160 Coursevall Drive Centreville, MD 21617 or to the Salem United Methodist Church at 23100 Old Fairlee Road Chestertown, MD 21620. To send online condolences to the family or view service information, visit www.fhnfuneralhome.com

Marion Milton Ireland, Jr. of Chestertown, Maryland went to his heavenly home on March 12, 2021 while at home. He was 90 years old. Marion was born on June 15, 1930 the son of the late Marion Milton and Nellie Jacobs Ireland. His love of family... View Obituary & Service Information

The family of Marion Milton Ireland Jr. created this Life Tributes page to make it easy to share your memories.

Marion Milton Ireland, Jr. of Chestertown, Maryland went to his...

Send flowers to the Ireland family.