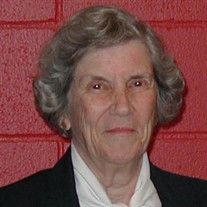 Marie-Therese ‘T.C.’ Larue Dwyer passed away on October 28, 2021 She was born 4/4/29 in New Orleans, LA the daughter of the late Corinne Bonnecaze and Ferdinand L. Larue. Also preceded in death by her husband Captain Thomas L. Dwyer, USN, (ret.) and siblings Kitty L. Mahaffey of Saratoga, CA; Ferdinand L. Larue, Jr. of Lafayette, LA; Suzanne Larue of New Orleans; Louis P. Larue of New Orleans; and the Rev. Charles J. Larue of Odessa, TX; and stepsons Thomas M Dwyer of Agana, Guam; and Sean P Dwyer of Honolulu, HI. Is survived by numerous nieces, nephews, great nieces and great nephews and their families; and stepdaughter Deidre D. Desommes and her daughter, Jade D. Quick and her family of St Petersburg, FL; and stepdaughter Maeve D. Grenier of Ruskin, FL. While living in St. Michaels and Easton, MD, she was a member of The Harbor Club and Talbot Country Club, and also served on the Historic District Commission of St. Michaels. She was on the boards of Christmas in St. Michaels and Critchlow Adkins Childrens’s Centers (formerly known as the Easton Day Care Center). She was also an alumna of the Academy of the Sacred Heart and Newcomb College where she was a member of Pi Beta Phi sorority and is a member of the Junior League of New Orleans. She was the last society editor of the New Orleans Times-Picayune. T.C. will be interred in the columbarium at Arlington National Cemetery along with her husband Tom at a later date. In lieu of flowers, financial contributions may be made to one of the following: Talbot Hospice Foundation, Inc, 586 Cynwood Drive, Easton, MD 21601; Academy of the Sacred Heart, 1821 Academy Road, Grand Coteau, LA 70541; or Jesuit Seminary, 4511 West Pine Boulevard, St Louis, MO 63108. For online condolences visit www.fhnfuneralhome.com.

Marie-Therese &#8216;T.C.&#8217; Larue Dwyer passed away on October 28, 2021 She was born 4/4/29 in New Orleans, LA the daughter of the late Corinne Bonnecaze and Ferdinand L. Larue. Also preceded in death by her husband Captain Thomas L.... View Obituary & Service Information

The family of Marie-Therese "TC" Larue Dwyer created this Life Tributes page to make it easy to share your memories.

Send flowers to the Dwyer family.