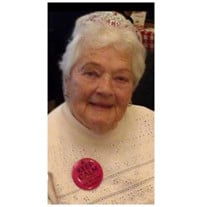 Marguerite “Peg” Ruth Cannon of Stevensville, Maryland passed away Saturday, April 9, 2022, at her home. She was 98. Born on March 6, 1924, in Youngtown, Ohio, she was the daughter of the late James S. and Sarah B. (Wilson) Downie. She graduated high school from Cuba Central School in Cuba, New York and attended Skidmore College in Saratoga Springs, New York. Peg married James W. Cannon on August 15, 1946. They had two daughters Lynne and Sandra. They lived numerous places until they settled in Stevensville in 1984. Peg enjoyed life to the fullest, hanging out with family and friends especially her daily happy hours out in the hangar with friends and neighbors. She liked to travel and attend antique airplane fly ins all over the country with her husband and longtime friends. Later in life she travelled with her family to destinations around the country, usually near a beach. She was always up for a beer or a glass of wine (or a few). Marguerite is survived by her sister Sarah B. Wallace of Maryland, daughters, Lynne Courtney of Texas and Sandra Cannon of New Jersey, granddaughters Bianca Sell of Maryland, Adrienne Bishop of Texas, and Heather Courtney of Maryland, grandsons Todd Courtney (Holly) of Maryland and Matt Cannon (Nicole) of New Jersey, eleven great-grandchildren and numerous nieces and nephews. In addition to her parents, she was predeceased by her husband James W. Cannon, sister Evelyn Downie, and brothers William “Bill” Downie and his wife Marge and brother James Downie and his wife Mary Lou. A celebration of life will be held on May 5, 2022 at 12 pm at 200 Kentmorr Rd in Stevensville. In lieu of flowers contributions can be made to Alzheimer’s Association at the following link http://act.alz.org/goto/pegcannon.

The family of Marguerite Ruth Cannon created this Life Tributes page to make it easy to share your memories.

Send flowers to the Cannon family.