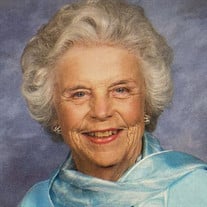 Margaret “Peggy” Williams Pickard Peggy Pickard, 97, of Easton, MD, passed away quietly in her sleep on October 23, 2021 in her cottage at Londonderry. Born in Lakehurst, NJ on January 16, 1924, she was the daughter of Shine Spotswood Halliburton and Elizabeth Halliburton. Her father's career in the Navy's dirigible program took the family to England, the Philippines, Hawaii, San Diego, Sunnyvale, and Norfolk. Peggy had one sister, the late Mary Halliburton Keeney. When Peggy was 14, her father retired to Macon, Georgia, his hometown, where she attended high school and had her own weekly radio show. While attending Wesleyan College in Macon, she met Ralph Benjamin Williams, who was in flight training at Warner Robins Army Air Depot. They married in June 1945. After the war they lived in North Carolina and in the Maryland suburbs of Washington, D.C. raising two children. She was quite active in the schools, church, and philanthropy, chairing multiple high-profile events. After her children moved away, she founded and operated her own public relations firm. She was widowed in the early 80's, and remarried a wartime friend of her late husband. She and Sam Pickard were married over 20 years, living in Washington, D.C. until Sam's death in 2006. With Sam she took up golf with the “Nine Holers” at Congressional Country Club, became active in the All Hallows Guild of the Washington Cathedral, continued her volunteer work with St. Francis Episcopal Church in Potomac, and enjoyed travelling, gardening, reading and spending time with her friends and family. In 2017 Peggy moved to Easton, MD to be closer to her daughter. At Londonderry, her new home, she made new friends and became known for her warm and gentle kindness, her beautiful smile, sparkling blue eyes, and her daily practice of reading the Washington Post from cover to cover. Her greatest joy was her family. She is survived by her son, Hal Williams (Cindy) of Flint Hill, VA; her daughter, Kate Williams Cox (Paul) of Oxford, MD; five grandchildren, Kimberly Cox of Oxford, MD, Christopher Cox (Carie) of Luxembourg, Henley Cox (Tim Hamlin) of New York, NY, Travis Williams of Boston, MA, Lizzie Williams Olmstead (Courtney) of Flint Hill, VA; and five great grandchildren, Landon Olmstead, Cooper Olmstead, Sam Cox, Leo Cox and Silas Hamlin. A memorial service will be held Thursday, December 2 at 11 am at Christ Church Easton, 111 South Harrison St., Easton, MD 21601. The church requests masks if you are not fully vaccinated. The interment will take place at a later date at St. Francis Episcopal Church in Potomac, MD. The service will be live streamed and recorded by the Christ Church Easton Facebook and YouTube. To share online condolences with the family, please visit www.fhnfuneralhome.com. Memorial donations may be made in her name to Talbot Hospice to support Talbot Palliative Care, 586 Cynwood Drive, Easton, MD 21601, or to All Hallows Guild of the Washington Cathedral, 3101 Wisconsin Ave., Washington, D.C. 20016.

Margaret &#8220;Peggy&#8221; Williams Pickard Peggy Pickard, 97, of Easton, MD, passed away quietly in her sleep on October 23, 2021 in her cottage at Londonderry. Born in Lakehurst, NJ on January 16, 1924, she was the daughter of Shine Spotswood... View Obituary & Service Information

The family of Margaret H. Pickard created this Life Tributes page to make it easy to share your memories.

Send flowers to the Pickard family.