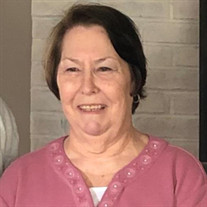 Lorena “Renie” Nordhoff Lott of Worton, MD passed away on April 6, 2022. She was 70 years old. Mrs. Lott was born in Chestertown, MD on December 15, 1951, the daughter of Otto and Lillian Nordhoff. She grew up in Kent County and graduated from Rock Hall High School in 1971. After graduation, she went to work at College Heights Sub Shop, where she met her husband, Pete. She then began to work in environmental health through the Kent County Health Department. Once she and Pete were married and starting their family, she stayed home to raise their children. She returned to work at the health department seven years later and eventually retired after 35 years in February of 2022. When her children were small, she was involved with Kent County 4-H and enjoyed her time with them. She loved working in her yard, her dogs, and taking care of her cows. In addition to her loving husband, she is survived by her children, Phillip Lott and Steven Lott, both of Worton; her brothers, Chris Nordhoff (Vivian) of Rock Hall, Paul Nordhoff of Lewes, DE, and Joe Nordhoff of Rock Hall; a special friend, Andrea Edwards (Timmy) of Rock Hall; as well as many nieces and nephews. A memorial service will be held on Tuesday, April 12 at 1:00 pm at Fellows, Helfenbein, and Newnam Funeral Home in Chestertown. A visitation hour will be held prior from 12:00 pm – 1:00 pm. In lieu of flowers, memorial donations can be made to Kent County 4-H at P.O. Box 386, Chestertown, MD 21620.

The family of Lorena Nordhoff Lott created this Life Tributes page to make it easy to share your memories.

Send flowers to the Lott family.