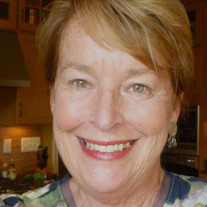 Kathleen McCarty Unti passed away on September 2, 2021, at her home. She was 77. She was born on July 7, 1944, in Detroit, Michigan, the daughter of the late William and Frances Brinker McCarty. Kathy married Walter Unti in 1965 and they made their home in Ann Arbor, Michigan where his was going to school. Kathy received her Dental Hygiene Degree from the University of Detroit and used it to work in Michigan, Pennsylvania, and Florida. After graduating from Aquinas College with a business degree in 1985, she started her own real estate firm in Grand Rapids, Michigan. Kathy was a hospice volunteer for 35 years, starting in Grand Rapids, MI, then Harrisburg, PA, then Sonoma, CA, and finally at Talbot Hospice in Easton, MD. She also enjoyed volunteering as a docent at the Sonoma Bouvier Preserve where she took fifth graders on hikes. Her sister, Patricia was an Adrian Dominican Sister, so she became an Adrian Dominican Associate and worked with other associates to support the communities work with the needy. Kathy is survived by her husband of 56 years, Walter Unti of Easton, children; Patricia Healy (Robert) of Wayne, PA, Michael Unti (Evangeline) of Mechanicsburg, PA, and Susan Yingling of Charlotte, NC; seven grandchildren, Ryan, Thomas, Olivia, May, Jake, Charlotte, and Skylar. In addition to her parents, she was preceded in death by her sister, Patricia McCarty, brother, William McCarty and son-in-law, Craig Yingling. Memorial contributions may be made in her honor to Talbot Hospice, 586 Cynwood Drive, Easton, MD 21601 or St. Vincent de Paul. A memorial service will be held on Thursday, October 7, 2021 at 11 AM at Sts. Peter & Paul Church, 1210 S. Washington St., Easton, with a luncheon to follow.

Kathleen McCarty Unti passed away on September 2, 2021, at her home. She was 77. She was born on July 7, 1944, in Detroit, Michigan, the daughter of the late William and Frances Brinker McCarty. Kathy married Walter Unti in 1965 and they... View Obituary & Service Information

The family of Kathleen McCarty Unti created this Life Tributes page to make it easy to share your memories.

Send flowers to the Unti family.