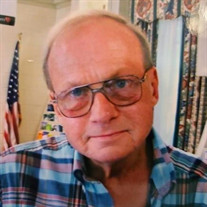 John Jerome Ward of Crumpton, MD passed away Sat. April 24, 2021 at University of Maryland Shore Medical Center in Chestertown. He was 77. John was born Oct. 10, 1943 in Wilmington, DE the son of the late Ellery and Florence “Corrie” Ward. After graduating High School he enlisted in the United States Airforce and served his country for 4 years. Over the years John worked a variety of jobs including managing retail stores in NY, New Orleans and South Carolina, he worked on an oil rig in Louisiana, and worked in nursing in Lynn, Massachusetts. After he returned home to his family in Chestertown he tended bar at the Blue Bird. His passion was photography and for many years he was the Washington College sports photographer as well as a wedding photographer. He also enjoyed spending his free time at the beach. In addition to his parents he was preceded in death by his grandson, Steven Kovacs. He is survived by two daughters, Danielle Botterman Shepard of Sandtown, DE, Joni Howe of New York, two grandchildren, RJ Shepard and Allie Howe, one sister, Karen Russum (Ralph) of Crumpton, MD, one niece Julie Smith (Robert) of Crumpton, MD, one nephew, JR Russum (Jenn) of Crumpton, MD, and four great nieces and nephews, Abby and Wyatt Russum and Emily and Nate Smith. A graveside service will be held Wed. April 28, 2021 at 2pm at St. Paul’s Cemetery in Chestertown, MD. In lieu of flowers contributions can be sent to St. Jude Children’s Research Hospital 501 St. Jude Place Memphis, TN 38105 or www.stjude.org and Nemours/Alfred I. DuPont Hospital for Children [email protected]

The family of John Jerome Ward created this Life Tributes page to make it easy to share your memories.

Send flowers to the Ward family.