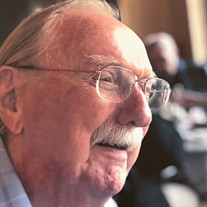 John Richardson, percussionist, music teacher, and sailmaker, died at age 92 on Wednesday, February 16, 2022, at the Caroline Center for Rehabilitation in Denton, Maryland. His family announced his death. Mr. Richardson was born on December 1, 1929, in Washington, D.C., and grew up and attended schools in the Anacostia neighborhood of Washington. While a teenager, he attended an Air Force Band concert, (The Army Air Corps Band at the time), and immediately determined that he wanted to be a drummer in that very band. He studied hard and within a few years auditioned and succeeded in becoming a member of the band. Mr. Richardson was a member of the U.S. Air Force Band for 27 years and during that time rose to the position of Section Leader while achieving the rank of Senior Master Sargent. During Mr. Richardson’s time in the band he toured throughout the United States numerous times where the band performed as “Ambassadors of Peace“. The band also travelled extensively in South America and Europe. Mr. Richardson met Marguerite Bogue in 1952 while playing drums at an NCO club in Washington. They married on April 18, 1953 in Cheverly, Maryland. He is survived by his wife of 69 years, Marge, two children, Lynn & Jay, six grandchildren, and five great grandchildren. Mr. Richardson was predeceased by his sister Marcia and his brother Ted. While playing in the Air Force Band Mr. Richardson started teaching drums to young people. Over the course of 40 plus years of teaching Mr. Richardson introduced over 500 students to the many facets of playing percussion, (Tympani, Xylophone, Traps, and more). A number of students continued on with their music studies and became professional musicians. In 1964, the Richardson family purchased a 19’ sailboat and were told that the best & fastest way to learn to sail was to race. Thus began a lifelong passion which resulted in Mr. Richardson to becoming a sailmaker at the U.S. Naval Academy, (after retiring from the AF Band), and the forming of many deep and long-lasting friendships. Passion might be the best word to sum up Mr. Richardson’s life. He was extraordinarily passionate for his family; for music, (especially Jazz), for sailing, for friends, and for life. Not only was he passionate for these parts of his life but he instilled passion in others – the mark of an exceptional teacher. Mr. Richardson passed peacefully surrounded by his wife, Marge, his daughter Lynn, and his granddaughter Lisa. Donations in lieu of flowers can be made to the Chesapeake Bay Foundation or the Peabody Institute of Johns Hopkins University. A visitation will be held Friday, March 4, 2022, at Fellows, Helfenbein & Newnam Funeral Home, 200 South Harrison St. Easton, MD 21601 from 6 – 8pm. A private Memorial Service will be held on Saturday, March 5, 2022.

The family of John William Richardson created this Life Tributes page to make it easy to share your memories.

Send flowers to the Richardson family.