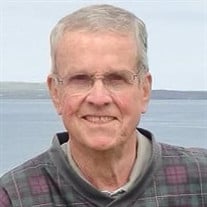 On June 17, 2021, John Francis Flavin Jr, beloved and devoted husband, father, grandfather and friend died at the age of 87 from complications related to Parkinson’s Disease. He is survived by his wife Betty: children John, Stephen and his wife Lynda, and Catherine; 10 grandchildren; and many nieces and nephews in Kansas City. He is also survived by the Detrich family of Trappe, MD. John was born on May 13, 1934, grew up in Kansas City, MO, and was preceded in death by his 4 siblings. Beyond his formal education, he was asked to represent the business community at a national security seminar in 1978 at The Army War College (AWC) and was an Air Force Veteran of the Korean War (196th Fighter-Bomber Squadron). He married Elizabeth (Betty) Stephenson of Cambridge, MD, on June 23, 1962, and they began their lives together in Baltimore and moved soon after to Mechanicsburg, PA. From there, they spent nearly 40 years in Ridgefield, CT, ultimately returning to the Eastern Shore of Maryland. John’s career began with the Catholic Digest. From a field representative role, he progressed to a sales leadership position with QSP, a division of the Readers Digest. He partnered with educators nationally throughout a successful career in fundraising. John was a devoted Catholic with a beautiful baritone voice, strong enough that children would turn around in the pews to see who was out singing the cantor. His faith was lived through service, including overnight care at the Dorothy Day shelter in Danbury, CT, and through consistent support of Catholic education and of the nuns. He was an avid golfer and bridge player, and enjoyed sharing those pastimes with family and friends. John was a longstanding member of both Pinehurst and Silver Spring Country Clubs. He scoured newspapers daily, particularly the New York Times and Wall Street Journal, enjoyed reading books on business and politics, and was quick to share a story. He will be remembered for his spirited style and generosity. A funeral mass will be held at 11AM on July 7, 2021, at Saints Peter & Paul Roman Catholic Church at 1210 South Washington Street in Easton, Maryland. The family will receive guests 30 minutes before the service; and the interment will be private. In lieu of flowers, donations in his name can be made to the Little Sisters of the Poor in Kansas City, Missouri (https://littlesistersofthepoorkansascity.weshareonline.org) or to the Dorothy Day Hospitality House at 11 Spring St, Danbury, CT 06810 (http://www.dorothydaydanbury.org).

On June 17, 2021, John Francis Flavin Jr, beloved and devoted husband, father, grandfather and friend died at the age of 87 from complications related to Parkinson&#8217;s Disease. He is survived by his wife Betty: children John, Stephen and... View Obituary & Service Information

The family of Mr. John Francis Flavin Jr. created this Life Tributes page to make it easy to share your memories.

Send flowers to the Flavin family.