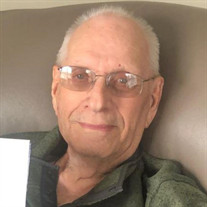 After 90 wonderful years and surrounded by his children, Col. John David Brougher, USAF, Retired, passed away on March 16th, 2022. John was born in Springfield, MO on February 18th, 1932, to the late John Auntony Brougher and the late Mary Lavina Morrison. He grew up milking cows on the family farm in Aurora, MO, which has now been in the family for more than a century. He was a member of the Aurora band and very active in the Lawrence County 4H. Throughout his life, John would attend the University of Missouri, University of New Hampshire, and the University of Central Michigan - earning degrees in agriculture, mechanical engineering, and business. John’s 22-year career in the U.S. Air Force, initially as a pilot then as chief of aircraft maintenance, took him to Athens, Greece; Tokyo, Japan; Bangkok, Thailand; Clovis, New Mexico; Tucson, Arizona; Hampton, Virginia; Pease, New Hampshire, and The Pentagon, Washington, DC. His love of country was displayed by wearing a flag pin every day and the gifting of the pins to everyone he met. After retiring from the military, he spent 17 years at General Electric, retiring as an Engineer Manager in the GE Space Division, stationed in Washington, DC, with travels to many GE facilities. John was a Shriner and 32’ Mason. John served on the Board of Directors for the Shriners Hospital for Children in Philadelphia for many years. After retiring from GE, John relocated to Dallas, PA and lived there until 2019 at which time he and Beverly moved back to Maryland to be closer to John’s children. A visit with John was never complete without a story (or ten) of his life on the farm or days in the military. The people he met and the friendships they shared, stayed with him in the retelling of those stories. John lived an incredible and full 90 years and, as he would say, someone up there “likes me”. He was an avid bridge player, loved fishing, boating, traveling, good conversation, Jack Daniels, and a good cigar. Along with his parents, John is predeceased by his first wife Georgeann Jones, of Peru, Indiana, (mother of his two children), second wife Beverly Slocum, of Dallas, PA, and younger brother and sister Charles and Marilyn, of Aurora, MO. He is survived by his son David A. Brougher of Annapolis, daughter Susan B. Graves (husband Allan) of Grasonville, granddaughter Stephanie G Mistretta (husband William), one great grandson, step-daughter Wendy Offutt, and step-granddaughter Sarah Milligan (husband Jim). A celebration of life gathering will be held on Saturday, April 9th from 12:00 pm to 2:00 pm at Fellows, Helfenbein & Newnam Funeral Home: 106 Shamrock Road, Chester, MD 21619. Interment at Arlington National Cemetery will take place with full honors at a later date. In lieu of flowers, contributions may be made to Shriners Hospital for Children: 3551 N Broad St, Philadelphia, PA 19140 or Compass Regional Hospice: 160 Coursevall Dr. Centreville, MD 21617. Online condolences can be made at www.fhnfuneralhome.com.

After 90 wonderful years and surrounded by his children, Col. John David Brougher, USAF, Retired, passed away on March 16th, 2022. John was born in Springfield, MO on February 18th, 1932, to the late John Auntony Brougher and the late Mary Lavina... View Obituary & Service Information

The family of Col. John David Brougher created this Life Tributes page to make it easy to share your memories.

After 90 wonderful years and surrounded by his children, Col....

Send flowers to the Brougher family.