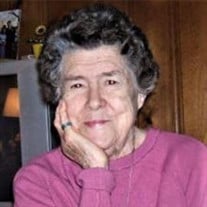 Jean Silcox Baldwin of Benton and formerly of Chestertown, MD died peacefully on Saturday, Oct. 24 at her daughter’s home in Benton, PA. She was 92 years young. Jean was born in Still Pond, MD in 1928, the youngest child of J. Horton Silcox and Elsie Green Silcox. She grew up on several different farms in Kent County. She loved growing up as a “farm kid,” and had many stories about her animals, farm life and big family dinners marked with laughter and storytelling. She graduated from Chestertown High School in 1945 and went on to study home economics at Western Maryland College (now McDaniel College). During high school and college, Jean worked in Chestertown at both Eliason’s Photographic Studio and the Chestertown Bank. Jean’s romance with her future husband, Bob, began as a letter writing project to support Chestertown’s servicemen overseas during World War II. “Bobby” replied to her letter (and photo!) and so the correspondence continued, as did the romance when he returned home in 1947. They were married in 1948 and moved to Lock Haven, PA, where they created their family of four children and raised them there for the next 20 years. After Lock Haven, Bob’s career took the family to Dighton, MA, Perry Hall, MD, and Gastonia, NC. When they retired, Jean and Bob returned to their hometown roots in Chestertown to be near their aging siblings. They were married for 66 years before Bob’s death in 2015. Jean’s primary occupation was always as homemaker and mom. She was a great cook (her specialty was her apple pie!) and an even better mom and grandmother. Along the way, she also explored jobs as a cooking instructor, a middle school home economics teacher, and a special education teacher. One of her favorite roles was promoting childhood literacy by performing as “Mother Goose” at library story hours, public events and birthday parties. Many people who knew her in those years still call her “Mother Goose”. Throughout her life, Jean connected with people from all walks of life and developed deep and enduring friendships. She was a gifted conversationalist, had a profound interest in people and quickly set others at ease. Her superpower was the ability to recall details about almost anyone she met, sometimes years later, and then to connect people’s stories. Jean enjoyed recounting her “small world stories,” which happened with uncanny frequency. After a stroke at age 75, she taught herself computer skills, and used the internet to stay connected to family and friends, old and new, from all over the world until her late eighties when her vision failed. Jean loved her family and many friends, all children, books, history, Mickey Mouse (with whom she liked to say she shared a birthday!),and teaching her grandchildren how to win a hotly contested game of Chinese Checkers. She enjoyed “treasure hunting” for an eclectic assortment of antiques, rarities, and bargains, which she also generously shared with others. Jean was whimsical, cheerful, generous, optimistic, funny, and kind. She always took the time to call friends or take roses to someone who needed them, remembered everyone, and spread love wherever she went. Jean enjoyed serving in many volunteer and civic organizations in her life, including garden clubs, PTA and women’s groups. In her retirement years, Jean enjoyed being part of the Chestertown Woman’s Literary Club and the Port of Chester Questers. She was a member of the First United Methodist Church of Chestertown. She was preceded in death by her husband of 66 years, Allen “Bob” Robert Baldwin, Sr.; her daughter, Susan Baldwin McGrady; her parents; her sister, Frances Silcox Clendaniel; and her brothers J. Horton, Tommy and Charles Silcox. She is survived by her children, Allen R. Baldwin, Jr. (Patti), of Norridgewock, ME; Frances Baldwin Shaffer (Joseph), of Benton, PA and Laura Baldwin-Stout (Bill) of Fort Collins, CO., and her son-by-law, Mark McGrady of Franklin, TN. She loved and was blessed by her twelve grandchildren and twelve great-grandchildren, the youngest of whom was born the day before she died. She is also survived by her sister-in-law, Claudia Baldwin of Salisbury, MD, and many nieces and nephews. In lieu of flowers the family suggests donations be made to the Kent County Farm Museum, 13689 Turner’s Creek Road, Kennedyville, MD 21645.Or, simply, to honor Jean’s memory, take some flowers to someone who needs them today.

Jean Silcox Baldwin of Benton and formerly of Chestertown, MD died peacefully on Saturday, Oct. 24 at her daughter&#8217;s home in Benton, PA. She was 92 years young. Jean was born in Still Pond, MD in 1928, the youngest child of J. Horton... View Obituary & Service Information

The family of Jean Silcox Baldwin created this Life Tributes page to make it easy to share your memories.

Jean Silcox Baldwin of Benton and formerly of Chestertown, MD...

Send flowers to the Baldwin family.