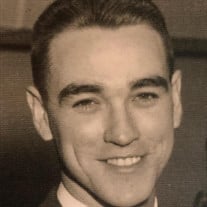 James C. Wilson was born November 29, 1926 in Dallas, Texas and left us on February 24, 2021 after a ten year battle with Alzheimer’s. Jim was the youngest of three children born to Alma and Joseph Wilson. After service in the military he attended and graduated from Oklahoma State University where he met the love of his life, Jeanne Thomas Wilson. They were married on the campus of OSU on January 20, 1951. Shortly after their marriage they moved to Battle Creek, MI where Jim worked as an actuarial underwriter for Wolverine Insurance Company. In 1962, the Wilson family moved to Winston-Salem, NC where they lived 40 years. Jim continued working in the insurance industry first with Integon Insurance Company and then later as an independent consultant. In his free time he enjoyed sailing, tennis and chess. In 2003 Jim and Jeanne moved to Chestertown, MD where they both lived for the rest of their lives. Jim was a valued member of the Heron Point Retirement Community and until Alzheimer's robbed him of his superior intellect, he served on various committees and participated enthusiastically in discussion groups covering politics, religion - even attending classes at Washington College. Jim waged a long and very courageous battle against Alzheimer’s. His wish that his battle in some way assist the medical research against this disease was granted upon his passing. Jim leaves a large and loving family who will miss his humor, his irreverence, his delight in arguing all sides of a question no matter how complex, his quirky and amazing intellect and his deep caring for all of us. He is survived by his children Stephanie Wilson Havenstein (married to Peter Havenstein) and Bruce Sandness Wilson (married to Lisa Westfall) of Bethesda, Maryland; his seven grandchildren: Peter Fulton Havenstein Jr., of Kensington, Maryland; Patricia Havenstein Cartin of Columbia, South Carolina; Polly Havenstein Barbiasz of Washington, DC; Paul James Havenstein of Chevy Chase, Maryland; Jennifer Diane Wilson, of Miami, Florida; Andrew Lawrence Wilson of Athens, Georgia; Julia Taylor Wilson of Atlanta, Georgia; three great grandchildren and numerous cousins, nieces, nephews, and generations of family who will miss him terribly‎. We take great joy in knowing that Jim delighted in being reunited with Jeanne and his son, Andy, upon his death. Per their wishes, Jim and Jeanne will be taken home to God's Acre in Winston-Salem, NC. A service will be held at that time. That date has not yet been determined. The family asks that in lieu of flowers, those wishing to remember Jim, consider a donation to the Alzheimer’s Foundation of America (https://alzfdn.org)‎.

James C. Wilson was born November 29, 1926 in Dallas, Texas and left us on February 24, 2021 after a ten year battle with Alzheimer&#8217;s. Jim was the youngest of three children born to Alma and Joseph Wilson. After service in the military... View Obituary & Service Information

The family of Mr. James Cornelius Wilson created this Life Tributes page to make it easy to share your memories.