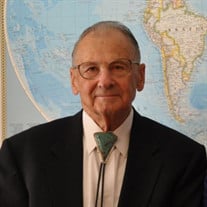 On September 9, 2021, James Elmer Thompson Jr (Elmer T) born 9/24/25 in Queenstown, MD, passed away of natural causes at the age of 95. He was predeceased by his wife Anna Murray Thompson (Roonie) on 9/28/19 and his son Kevin Barton Thompson on 4/8/61. He is survived by his sons Murray (Marcey), Jeff (Barb), Ben (Dee) and Scott (Jaimi) Thompson; Grandchildren Robbie (Christie), Katelyn (Tyler), Jake (Jody), Kevin and Mary Thompson; and Great Grandchildren Beckett, Emerson, Charlie and Caleb Thompson. Like most of the greatest generation Elmer enlisted in the navy in 1943. After the war he obtained his bachelor’s degree from the University of Maryland and his law degree from George Washington University School of Law while working for the U.S. Treasury. After graduating from law school, he became a Special Agent for the FBI and was instrumental in apprehending the second person named on the FBI’s first Top 10 Most Wanted List. On June 7, 1948, he married the love of his life (since age 13) Roonie. They were happily married for 71 years until Roonie’s passing. They moved to Centreville in 1951 where he opened a law practice which operates to this day through his son Jeff. In addition to maintaining an office for the general practice of law, he was elected Queen Anne’s County States Attorney early in his career and later served as counsel to the Queen Anne’s County Commissioners for many years. Elmer was active in the American Legion, Boy Scouts, Salvation Army, Kent Island Yacht Club and was actively engaged in numerous community activities. Like his father, an avid Eastern Shore outdoorsman, Elmer was always ready to go fly-fishing for trout and salmon at their cottage in Maine or hunting on the farm with his best friend Bill Young always nearby. Elmer and Roonie loved travel and adventure. They learned to cross country ski at age 50 and downhill ski at age 60 – when not on the slopes, they spent many hours in the gym until well into their 80s. He (they) had a great, healthy, long life and will be sorely missed, but he is once again with the love of his life!!! A funeral memorial service will be held at Old Wye Parish in Wye Mills, MD on Friday September 24, 2021 at 11AM with interment in the church cemetery. In lieu of flowers, please send donations to Queen Anne’s YMCA Capital Campaign, 123 Courseval Drive, Centreville, Maryland 21617. For online condolences see www.fhnfuneralhome.com

On September 9, 2021, James Elmer Thompson Jr (Elmer T) born 9/24/25 in Queenstown, MD, passed away of natural causes at the age of 95. He was predeceased by his wife Anna Murray Thompson (Roonie) on 9/28/19 and his son Kevin Barton Thompson... View Obituary & Service Information

The family of Mr. James Elmer Thompson Jr. created this Life Tributes page to make it easy to share your memories.

Send flowers to the Thompson family.