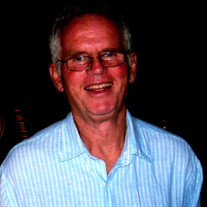 We are sad to announce the passing of James (Jim) Francis Barry of Chestertown, Md. on August 8, after a long journey with Parkinson’s disease. Jim was born on September 28, 1944 in Peabody, MA to Marie and Arthur Barry and married Sheila McIntire of Marlbehead, MA in 1967. The two enjoyed 54 years of devoted marriage. Jim's engaging personality and sharp wit drew people to him. For much of his life, Jim stood up for the underprivileged and underserved, without consideration for the consequences. His passion for justice and service set an example for those who knew him to follow. A graduate of St. John’s Prep, Boston College (B.A.), Suffolk University (MBA), and Northeastern University (Ed.D.), Jim enlisted in the Navy in 1966 and served in Vietnam as a Weapons Officer in 1968 aboard the USS Mt. McKinley based in Da Nang Harbor. He earned the Vietnam Service Medal, Bronze Star, and the Vietnam Campaign Medal and left active duty in October of 1969, and served in the Naval Reserves afterward. In 1980, Jim took a life-changing sabbatical in Haiti where he helped small scale farmers by forming a co-op bank. This enabled farmers to purchase seed and chicken coops to grow their business, support their families, and enrich their communities. This was the first of many trips to Haiti. Jim also volunteered in Mother Teresa's Home for the Dying, her orphanage in Port-au-Prince, and, in 1990, accepted an appointment from the Organization of American States to serve as one of 200 international observers during Haiti’s first democratic elections. A much beloved coach and educator, Jim enlightened and empowered his players and students to become their best selves and inspired many of his students along the way. He joined the faculty at Cape Cod Community College in the 1970s and 80s and turned around the hockey program taking the team to a national championship tournament in Lake Placid, NY. In 1988 Jim accepted an appointment to the US Naval Academy to rejuvenate its club hockey program. Over eight seasons he accumulated a record of 91-42-12, enjoyed four league championships, and took the program to two national championship tournaments. A very popular coach and professor of leadership and ethics, Jim confronted systemic challenges within the Navy’s culture by authoring a passionate and controversial Washington Post op-ed in March of 1996 entitled Adrift in Annapolis: To Understand Why the Navy’s Moral Compass is Broken, Start at the Naval Academy”. The article provoked national and Congressional discussion and reflection, and afterwards Jim left the Academy and moved his family to Chestertown, on Maryland’s Eastern Shore. Before transitioning from his career as an educator, Jim taught university students on the Semester at Sea program on two different occasions. Jim also distinguished himself as a developer in the North End of Boston. In 1981 he founded JF Curtis Development and purchased and modernized a number of buildings in Boston’s North End. His prize piece was the construction and development of 21 Cleveland Place. In 1978 Jim and Sheila brought their family to Cuttyhunk Island, MA where they created a business offering mooring services to boaters and spent decades summering and developing lifelong relationships with many islanders. One islander commented that wherever he went, Jim made memories for people. He was a character who delighted in telling jokes, regaling friends with humorous stories and spending time with people he cared for. Cuttyhunk has remained the centerpiece of their lives and the root of many of their lifelong friendships. Jim and Sheila were long-time residents of Barnstable, MA, until they moved their family to Andover in 1982, then to Annapolis, Maryland, and finally to Chestertown where he passed peacefully on Sunday morning, August 8th. An ardent philanthropist, Jim served on non-profit boards including two shelters dedicated to serving those finding themselves temporarily homeless, St. Francis House in Boston and The Baltimore Station in Maryland, as well as Kent School in Chestertown. At both shelters Jim used his engaging personality to design and offer leadership programs for more than two decades to give life skills to those less fortunate so they could rejoin the workforce and fulfill their potential. A long-time member of Al-Anon and Adult Children of Alcoholics and Dysfunctional Families, Jim poured his energies into sustaining thriving chapters of both on Cuttyhunk Island and in Chestertown. Finally, he created a support group for people with Parkinson’s and their families in Chestertown, Md that continues on. He is survived by his loving wife Sheila, their children, Shawna Buckley (Marc), Chandon Barry, Ajay Barry (Jackie), Alicia Barry (John), Nathan Barry (Lindsay), and their 9 grandchildren (Jack, Aidan, Cotter, Shawn, Colin, Matthew, Mila, Gillian, and Elle). Jim was predeceased by his brother Arthur Barry, and his brother-in-law James H. Frame, and is survived by his siblings, Katherine and Curtis (Pauline), his sister-in-law Carol and their 9 nieces and nephews. Please send donations in lieu of flowers to Jim’s favorite charities: Rock Steady Boxing (https://rocksteadyboxing.org/donate/ Designate Rock Steady of Centreville), The Baltimore Station (https://baltimorestation.org/donate/, St. Francis House of Boston (http://www2.stfrancishouse.org/site/PageServer?pagename=SFH_homepage), and Cuttyhunk Fire and Rescue Company (mail checks to Town of Gosnold, Cuttyhunk Island, MA 02713, designate Cuttyhunk Fire and Rescue). A visitation and celebration of life will be held for Jim at Helfenbein and Newnam Funeral Home in Chestertown, Md on September 18, 2021 from 1-3pm. Additionally, there will be a burial service at Cuttyhunk Cemetery on October 9, 2021 at 11am followed by a luncheon and sharing of memories.

We are sad to announce the passing of James (Jim) Francis Barry of Chestertown, Md. on August 8, after a long journey with Parkinson&#8217;s disease. Jim was born on September 28, 1944 in Peabody, MA to Marie and Arthur Barry and married Sheila... View Obituary & Service Information

The family of James "Jim" Francis Barry created this Life Tributes page to make it easy to share your memories.

We are sad to announce the passing of James (Jim) Francis Barry...

Send flowers to the Barry family.