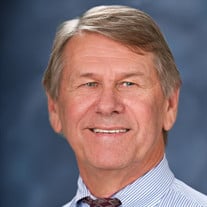 Gary James Jones, 73 of Easton, died suddenly on June 7, 2021. Born in Easton, MD, August 8, 1947, he was the son of the late James Orval and Ella Jane (Marshall) Jones. He married Ruth Ann Williams (Jones) of Hebron, MD on June 19, 1976, and they would have celebrated their 45th wedding anniversary this year. He is survived by his loving wife who was his most trusted friend, soulmate, and partner through life; two children, Erin Elizabeth Jones of Wittman, MD and Brian Christopher Jones (Lisa) of Cambridge, MD; 4 grandchildren, Tenley Smith, Austin Jones, Holly Jones, and Jeremy Jones, 3 Step-grandchildren, Bradley Haddaway, Amberly Totara (Chuck), and Haley Edwards, and 3 step-great grandchildren. Gary was a proud Eastern Shore native with strong roots in the communities of Talbot County. He was a proud husband, father, and grandfather and loved spending time with family and friends. One of his proudest moments in life was becoming a father and then watching both of his children become adults involved in healthcare careers as well. He coached Little League, was involved in Boy Scouts, and was very involved in the kids’ school activities. He loved the outdoors and spent many hours boating, hunting waterfowl, “chilling” out at the pool, sitting on the beach taking in the sun and playing Rock and Roll music. Gary played drums in a number of local bands since the 1960s; In Mates, Krystal, Second Wind, Off the Hook (the Shore Regional Health Band), and most recently Southbound. He always played barefoot regardless of the venue, casual or formal, and was often referred to as the “Barefoot Drummer”. He was still playing at “gigs” up until the time of his death. Gary graduated from St Michaels High School. He then went on to earn his Bachelor’s in Health Care Administration and later took classes at the University of Maryland to work toward his doctoral candidacy status in Human Development and Neurophysiology. He was a Licensed Respiratory Care Practitioner in the State of MD, a Registered Respiratory Care Practitioner through the National Board of Respiratory Care, a Fellow of the American College of Cardiovascular Administrators (FACCA), and he held numerous professional memberships. Gary was employed at the University of Maryland Shore Regional Health for 50 years prior to his retirement in December 2019. However due to his true commitment and love of his work in Cardiovascular Services, following retirement he remained on as a “consultant” until a new Director for the services was hired and was still working in that capacity at the time of his death. During those years he had a huge impact on the healthcare system and the community. As Ken Kozel, President and CEO of UM Shore Regional Health put it “service to his community was at the core of Gary’s being.” According to his wife, he demanded excellence and worked to assure state-of-the art cardiovascular healthcare for our communities. He was instrumental in the establishment of numerous cardiovascular specialties at UM Shore Regional Health including Non- Invasive Vascular Services, Sleep Disorders Centers in all 3 Shore hospitals, Diagnostic Cardiac Catheterization Lab, Cardiac Rhythm Device Implantation Services, Cardiac Rehab Services in all 3 hospitals, Cardiac Electrophysiology and Interventional Cardiology including primary and elective angioplasty. The designation of Cardiac Interventional Center in 2018 through the State and the establishment of the Heart and Vascular Center in 2019, with his appointment as the first director of the newly established center, was his most proud work moments and as Gary himself put it “ to assure our patients have convenient access to very comprehensive cardiovascular care, close to home.” Gary was one of a group of five firefighters, Basic Life Support Providers and Cardiac Rescue Technicians in Talbot County who recognized the need for prehospital cardiac care in the early 80s. He worked tirelessly as a volunteer Advance Life Support Provider with the other four members to provide volunteer coverage throughout Talbot County 24/7, 365 days a year in the early 80s. As the need grew, he was instrumental in establishing the paid services we have in the communities today. Over the years he was a Paramedic Instructor, a Clinical Instructor for Respiratory Care Practitioners, and a mentor many. He also served as a Forensic Investigator for Talbot County from 1989 to 1999. Gary served as a Board member of the Talbot Paramedic Foundation and recently became a Board member of the Tilghman Watermen’s Museum. A Celebration of Life honoring Gary will be held on Sunday, June 13, 2021, from 1pm to 5pm at The Milestone, 9630 Technology Drive, Easton, MD where there will be an opportunity to laugh, share stories, view family and work photos and listen to the “Barefoot Drummer” play some of his music. Dress is casual. In lieu of flowers, donations can be made to: Talbot Paramedic Foundation in Care of the Sylvia Gannon Education Scholarship Fund PO Box 2237 Easton, MD 21601or on-line www.talbotparamedic.org Or the Cardiovascular Fund University of MD Memorial Hospital Foundation, P.O. Box 1846, Easton, MD 21601.

The family of Mr. Gary J. Jones created this Life Tributes page to make it easy to share your memories.