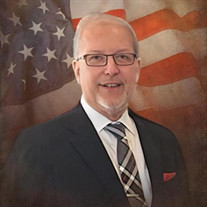 ***3/17/22 UPDATE: SERVICE LOCATION HAS CHANGED TO MOTHER OF SORROWS LOCATED IN CENTREVILLE, MD*** Garry J. Augustine passed away surrounded by family on Monday, March 14th, 2022 at the age of 71. Garry was a loving husband, caring father, Vietnam veteran, and lifelong veterans advocate. The Lake County, Ohio native enlisted in the U.S. Army in August 1969. Following training, Garry was assigned to the 198th Infantry Brigade in South Vietnam. He was severely wounded by a land mine explosion during a combat patrol in the Batangan Peninsula on April 9, 1970. His injuries resulted in the loss of use of his left hand and left foot, multiple shrapnel wounds to his body and the loss of his spleen. Due to the extent of his injuries, he was medically retired from the Army in December 1972. Garry earned a bachelor’s degree with honors from Ohio University in 1978 and master’s degree in sociology at Cleveland State University in 1983. Garry met and married the love of his life, the former Kelly Lambing, in 1986 and lovingly raised two children, Chelsea and Kyle. He welcomed with open arms his son-in-law, Justin Canning and his daughter-in-law, Doctor Amita Jain-Augustine. He had just started his greatest journey as G-Pop to his 10 month old grandson, Austin Canning and 1 year old grand-puppy Lilly Augustine. Garry’s greatest passion was spending time with loved ones and, being an avid boater, staying near the water. As a man who found joy in staying active, he could frequently be found riding in his convertible (top down), enjoying a bike ride, kayaking on the Chester river, exploring the many outdoor restaurants on Kent Island or enjoying yappy-hour with his beloved dog Miss Izzy. In 2003, Garry moved the family to Washington D.C. where he was appointed Associate National Service Director followed by National Service Director at the Disabled American Veterans (DAV). In that role, Garry managed all activities of DAV’s National Service Program, which employs approximately 270 professional national service officers (NSOs), 34 transitional service officers (TSOs) and support staff in 100 offices throughout the United States and in Puerto Rico. In 2013, Garry was appointed Executive Director for the more than 1 million-member DAV National Service and Legislative Headquarters. His responsibilities included oversight of DAV’s National Service and Legislative Programs. He was the organization’s principal spokesperson before Congress, the White House and the U.S. Department of Veterans Affairs (VA). Prior to Garry joining DAV’s professional staff in 1988 as a national service officer apprentice in Cleveland, Ohio, he served as the hospital transportation coordinator for the DAV Department of Ohio at the Cleveland Wade Park VA Hospital. He remained at the Cleveland national service office where he was promoted to Assistant Supervisor in 1997 and Supervisor in 2000. He was appointed Assistant National Service Director at DAV National Service and Legislative Headquarters in 2002 and was subsequently appointed Deputy National Service Director in January 2004. In July 2010, he was appointed National Service Director and served in that capacity until he was appointed Executive Director in 2013. Garry embodied DAV’s mission to serve others, always remembering to put the disabled veteran at the center of his work. He improved the lives of untold thousands of veterans. As impactful as Garry was at work, his impact as husband, father, grandfather, uncle, brother, mentor, advocate, friend, and neighbor will resonate long after he’s gone. His professional successes will continue to endure and improve the lives of the veteran community for years to come. His legacy will continue to live on through his wife, children, grandchildren, friends and family. Military burial with honors will be held at a later date at Arlington National Cemetery. In lieu of flowers, memorial contributions may be made to Disable American Veterans (DAV) at www.dav.org

***3/17/22 UPDATE: SERVICE LOCATION HAS CHANGED TO MOTHER OF SORROWS LOCATED IN CENTREVILLE, MD*** Garry J. Augustine passed away surrounded by family on Monday, March 14th, 2022 at the age of 71. Garry was a loving husband, caring father,... View Obituary & Service Information

The family of Garry James Augustine created this Life Tributes page to make it easy to share your memories.

Send flowers to the Augustine family.