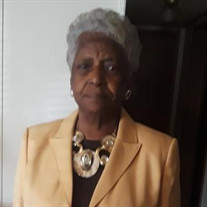 Frances Elizabeth Jacobs, age 82, was born on August 11, 1938 in Marydel, Maryland. She received her early education at the Dudley’s Corner School and later attended Kennard High School. She was married to the late Freddie Jacobs of Chestertown, Maryland. On August 5, 2021, Frances answered the unexpected call to eternal rest at Advent Health Hospital in Orlando, Florida. Frances had a love for life and enjoyed being active and busy, starting with membership at the New Life Community Methodist Church in Centreville, Maryland where she sang on the Gospel Choir and Combined Choir, as well as working on the culinary committee and serving with the United Methodist Women. For many years she was a member of the American Legion Women’s Auxiliary of Chestertown, Maryland and Club Feminique. She loved watching Wheel of Fortune, doing word searches, shopping and yard sales, and Frances was the queen of purses and shoes. Never one to be idle, her working career included: Campbell’s Soup, United Shellfish of Grasonville, Maryland and Schlegels of Chestertown, Maryland. She retired from Dixon Valve & Coupling in November of 2002. Later in May of 2007 she accepted a job at Hidden Treasures Thrift Store working with adults with special needs. Although a new type of working experience, she excelled at working with the clients and they all loved “Ms. Frances”. She retired from there in September of 2018. Frances was preceded in death by her mother and father, James and Dorothy Hynson; a sister, Elaine King; a brother, Walter; and three brothers-in-law, Arthur “Pee Wee” Fisher, Jesse King, and Ronald Demby. Frances reveled in the love of family and friends. She was a devoted mother and leaves a legacy of love to her daughter, Thelma (Lou) Staten of Dover, Delaware (Nathan A.K.A Cal), and a son, Charles Hollis Goldsboro of Dover, Delaware. Her memories and role as matriarch of the family will be forever cherished by: four grandchildren, Keisha, Kenyetta, Cameo, and Damon; four great-grandchildren, Brianna, Christopher, DeAndre, and Kayden; one grandpup, Polo; three sisters, Julia Demby of Millington, Maryland, Dorothy Parham of Mechanicsburg, Pennsylvania (Louis), Helen Fisher of Chestertown, Maryland; one brother, James Hynson of Sun City, Florida (Ruth); five adopted daughters, Terry Pauls Smith, Terese Garnett, Norene Wilson, Lisa Phillips, and Roberta Phillips; as well as numerous nieces, nephews, cousins, and friends.

Frances Elizabeth Jacobs, age 82, was born on August 11, 1938 in Marydel, Maryland. She received her early education at the Dudley&#8217;s Corner School and later attended Kennard High School. She was married to the late Freddie Jacobs of Chestertown,... View Obituary & Service Information

The family of Frances Elizabeth Jacobs created this Life Tributes page to make it easy to share your memories.

Send flowers to the Jacobs family.