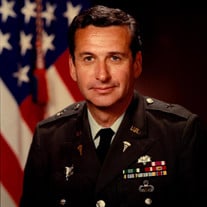 Brigadier General Dr. Edward R. Burka passed away on January 9th shortly after this 90th birthday simply of old age, nothing more. Born of two Russian immigrants in Washington, D.C., both of whom fled the pogroms and arrived at Ellis Island while in their teens. His father, with nothing to his name, opened a small grocery store which he eventually sold, the proceeds of which he turned into real estate, where he was high-ly successful and, for one thing, was co-owner of the well-known string of movie theaters in Washington D.C. known as the K-B theaters. As a result of his father’s background and success, Dr. Burka was passionate about America and dedicated to the service of a country he saw as a pillar of freedom and the true land of opportunity. As a high schooler, he at-tended Staunton Military Academy and then went to Princeton Universi-ty, where he was an active member of the track team, the Elm Club, and ROTC. He graduated magna cum laude. While a 1st Lieutenant in the Army Reserve, he got his medical degree from Columbia University, where he met his first wife, Susan Swift, who was studying to be a regis-tered nurse. He was an avid fan of the institution of marriage, and his last wife, Jackie Cushman, sported the custom license plate NUMBER FOUR. An eminent hematologist, he managed the Sickle Cell Anemia Clin-ic and Blood Bank at Philadelphia’s Thomas Jefferson University Hospi-tal while also on staff as a professor, known for his humor and ability to make complicated concepts simple and understandable. As a noted re-search scientist, he published 80 times and was once a visiting senior sci-entist at the Friedrich Miescher Institut in Basel, Switzerland. He also served on Pennsylvania’s Professional Advisory Committee on Sickle Cell Anemia, the Hematology Review Board for the American Institute of Biologic Sciences, and the editorial board of Military Medicine. In re-viewing his achievements, the Burka family is amused to learn that, among other things, he belonged to the Red Cell Club, which we imagine to be a place where doctors can mutually celebrate the existence of blood. He also undertook an ambitious military career. As a doctor in the medical corps, he voluntarily entered the Airborne Special Forces, where he became a Master Parachutist. In 1958 and 1959, he was a Jumpmaster at Weisbaden Air Force Base in Germany. He successfully completed 69 jumps until, on his last jump, a crosswind flung him sideways at the mo-ment of impact, and the shock of the landing travelled up his right leg to his shoulder, dislocating it and requiring the insertion of a pin. From 1979 to 1983, he was the U.S. Army’s Deputy to the Surgeon General for Moblization, responsible for, among other things, planning logistics for the evacuation of U.S. cities in the event of a nuclear or biological disas-ter. He was also an avid collector of and expert on U.S. medical military insignia, uniforms, and instruments, and was regarded by some as owning the most complete collection of them in the world. He is survived by daughters Karen and Jane, son Tom, and his grandchildren Ella and Greyson Boblitz and Nicholas and Miraya Burka. Services will be held at the Fellows, Helfenbein & Newnam Funeral Home in Chesterton, Maryland on Saturday, January 16, at 4:00 p.m.; public visitation is from 3:00 to 4:00 o’clock. Those who wish to partici-pate but cannot attend can view the livestream or leave a tribute at https://www.fhnfuneralhome.com.. In lieu of flowers, the family encour-ages donations to St. Jude’s Children’s Hospital.

Brigadier General Dr. Edward R. Burka passed away on January 9th shortly after this 90th birthday simply of old age, nothing more. Born of two Russian immigrants in Washington, D.C., both of whom fled the pogroms and arrived at Ellis Island... View Obituary & Service Information

The family of Edward Richard Burka created this Life Tributes page to make it easy to share your memories.

Send flowers to the Burka family.