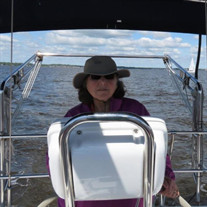 Patricia “Diane” Lucas of Stevensville passed away the evening of August 20th, 2021 in the comfort of her home. She was 72 years old. Diane was born on November 14th, 1948, to Marie Polosky (Morris). Diane grew up in Bobtown, PA and graduated from Mapletown High school. She spent summers in Baltimore and made many family trips to Ocean City, Md. Diane got her Bachelor of Science at what was then called Towson State College, which is where she would meet her husband, Marshall Lucas. Marshall appreciated and admired the intelligence and enthusiasm she presented herself with, so he found an excuse to talk to her one day in Economic history of the US. Diane and Marshall spent 49 special years of marriage together. They successfully raised many beloved poodles, and even won multiple titles in showing. Their poodles competed in competitive agility and obedience shows. Diane finished Rudee to a UKC Breed Champion. After college, Diane taught for a few years before she worked in publishing. She then worked for the State of Maryland for many years, first with the employment service and finally with the governor’s budget office where she enjoyed working with a succession of governors and department heads. Diane was also an avid sailor. The couple enjoyed sailing together since 1978. They owned many boats over the years, which started out small, and gradually became big enough to take the dogs along on. Their favorite boat was named Merry Thought, a Catalina 320. Merry Thought Land Yacht became the name of their RV that they spent time traveling in. Along with her mother, Diane is predeceased in death by Edward Polosky. She is survived by her loving husband Marshall and their two poodles Casey and Madison. She is also survived by her brother Gary Polosky. In lieu of flowers, contributions can be made to Poodle Club of America Rescue Foundation, Inc . Online condolences can be made at www.fhnfuneralhome.com.

The family of Diane Lucas created this Life Tributes page to make it easy to share your memories.

Patricia “Diane” Lucas of Stevensville passed away the evening...

Send flowers to the Lucas family.