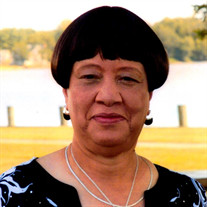 Cora Doris Mae Robinson, “Sister”, of Millington, MD went to be with the Lord on October 15, 2021 at her home. She was 78 years old. She was born on August 14, 1943 in Chestertown, MD. She married Hollis Tony Robinson in 1964. In this union, two children were born: Sheila and Melinda. In 1981, she met her significant other, Orvin Elliot. After graduating from high school in 1961, she worked at Vita Foods. In 1964, she went to work at Campbell’s Soup. In 1972 she worked at Rac Foods, which later became Con Agra, until her retirement in 2004. After retirement, she prepared food for Judge Boyer and his wife for several years and worked for Russum’s Antique Auction for about 13 years. She was known for her famous white potato pies. In her early years, she enjoyed traveling by car or motorcycle. She also enjoyed sewing, decorating, crafts, and just going out shopping with Orvin. She was preceded in death by her parents, Herman and Henrietta Henry; two sisters, Janette and Martha Henry; a brother, Herman Henry; and a daughter, Sheila Wesley. She leaves to cherish fond memories her daughter, Melinda Robinson (Jerome Hutchins, Jr.); her significant other, Orvin Elliott; stepdaughter Chanelle Murray (Sheldon); brothers, Lycurgus Henry (Anna Mae) and Oliver Henry (Vanessa); son-in-law, Victor Wesley; grandson, Marcus Wesley (Jennifer Glover); granddaughter-in-law Jaqe Wesley; grandchildren, Aleysha Williams, Tylante Wilson, Jerome Hutchins III, and Malachi Miller; great-grandson, Josiah Wesley; sister-in-law, Dianne Brooks; special family, Lois Elliott (Ernestine) and Delores Taft Elliott (Kendard); devoted niece, Linda Briscoe; devoted friend, Johnny Kilson; as well as a host of nieces, nephews, and special friends. In lieu of flowers, memorial donations can be made to Compass Regional Hospice at 160 Coursevall Road, Centreville, MD 21617. Services will be held on Saturday, October 23 at 11:00 am at Fellows, Helfenbein, and Newnam Funeral Home. A two-hour visitation for relatives and friends will be held prior, from 9:00 am – 11:00 am. Interment in Georgetown Cemetery will follow.

The family of Cora Doris Mae Robinson created this Life Tributes page to make it easy to share your memories.

Send flowers to the Robinson family.