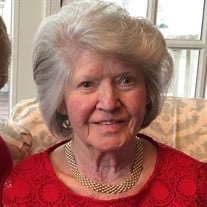 Christa Brigitte Grantham of Oxford, MD, formerly of Alexandria, VA, passed away peacefully at her home with family by her side on January 29, 2022. Chris was born on January 25, 1940, in Ludwigsburg, Germany to Walter and Josepha (Lore) Kegreiss. She lived during World War II and her father was a prisoner of war in Russia for many years. These experiences influenced Chris, leading to her resilience and strength. Chris met the love of her life and lifelong dance partner, Neal Grantham, on a blind date while Neal was stationed in Ludwigsburg with the military. Neal and Chris were blessed to share 60 years of marriage and goodnight kisses every night without fail! Chris was a bookkeeper when she met Neal. After they were married, she was a wonderful homemaker for Neal and their two daughters, Karin and Suzy. She was also proud of her work for H&R Block where she worked during tax season for more than 20 years after her daughters were grown. Chris was spunky, energetic, opinionated, and a hostess to everyone. She loved family gatherings where she was known for her delicious German cooking. Chris always had hugs, kisses, and gummy bears for her kids and grandkids, and loved to tease and be teased! Neal and Chris enjoyed socializing with fellow military families transplanted from home, dancing, music events at the Kennedy Center, travel, tennis (especially doubles with the girls), and time with family. Chris joins her beloved Neal in heaven. She is survived by her daughters, Karin (Richard) Osborne of Oxford, MD, and their children Nicole (Ryan), Christopher (Anna) with Adelyn and Daniel, Ashley, Caroline, Lily; daughter, Suzy (Mike) Schipper of Prior Lake, MN, and their children Grant, Brandon, and Ryan. Chris was preceded in death by her husband Neal, parents, Walter and Lore, and her sister, Karin (Gerd) Trautwein. A visitation and ceremony will be held on Monday, February 7th from 5 to 7 PM at the Fellows, Helfenbein & Newnam Funeral Home in Easton, MD. A funeral will be held at Arlington National Cemetery in Washington, D.C. at a later date. Memorials may be directed to the family and will be donated to the Tunnels to Towers Foundation. While we are having a visitation in person, if you are unable to attend, we encourage you to view the live stream. To view please click on the "Photo/Video" or "Media" tab and then click on the WebCast photo.

Christa Brigitte Grantham of Oxford, MD, formerly of Alexandria, VA, passed away peacefully at her home with family by her side on January 29, 2022. Chris was born on January 25, 1940, in Ludwigsburg, Germany to Walter and Josepha (Lore) Kegreiss.... View Obituary & Service Information

The family of Christa Brigitte Grantham created this Life Tributes page to make it easy to share your memories.

Send flowers to the Grantham family.