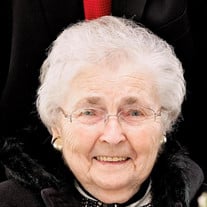 Cecelia Cianferano, beloved mother, grandmother and great-grandmother, was called to her Lord on Sunday, April 11, 2021, at her home in Oxford, MD. She was 92 year old. Cecelia “Cel” was born Cecelia Ann Barnickel on November 18, 1928 in Baltimore to parents Sebastian and Elizabeth (Maisch) Barnickel. Cel is a graduate of the Saint Michaels Commercial Schools. After graduation, she began working for the State of Maryland as a key punch operator with Employment Security. She left the position in the State to teach the 5th grade. In 1968 she moved to Talbot County, returning to a State role as typist for the District Court. In 1974, she became Commissioner and retired in 1985 as Principal Clerk. She moved to Oxford in 1977. Cel, also known as Mommom, was a selfless lady raising three generations of her family. She had room in her heart for everyone and never met a stranger. After retirement, she became Mommom to many children whom she loved and cared for. Some of her pleasures included sewing, crocheting, knitting, cooking, loud clocks, reading, babies, visitors and visiting, saving all things that might be useful, puzzle solving, Tarzan and Lone Ranger movies, sipping Dark and Stormies, and listening to classical music. Cecelia is survived by her son, Donald F. Mentzer, two grandchildren, Eric J. Mentzer and Amanda J. Mentzer, and four great grandchildren, Hunter J. Johnson, Rachel A. Johnson, Waverly M. Mentzer, and Marlowe J. Mentzer. She is also survived by her many nieces and nephews as well as special friends Paulettte Albury and Liz Gay. Three brothers, Joseph G. Barnickel, J. William Barnickel, James S. Barnickel, one sister, Clara S. Sandkuhler, and her dear childhood friend Clara R. “Toots” Ernest predeceased her. In lieu of flowers, please make donations to the Oxford Ambulance Services.

Cecelia Cianferano, beloved mother, grandmother and great-grandmother, was called to her Lord on Sunday, April 11, 2021, at her home in Oxford, MD. She was 92 year old. Cecelia &#8220;Cel&#8221; was born Cecelia Ann Barnickel on November... View Obituary & Service Information

The family of Cecelia Ann Barnickel Cianferano created this Life Tributes page to make it easy to share your memories.