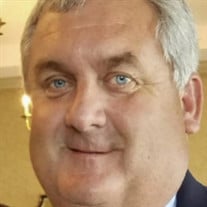 On October 26, 2021, C. Jeffery “Jeff” Parks died peacefully surrounded by family at his home. He was 57. Jeff was born in Easton, MD on January 17, 1964, the son of C. Ellis Parks and Patricia Parks. Jeff attended Sts. Peter and Paul Elementary School and graduated from Easton High School in 1982. After high school, Jeff attended Chesapeake College, where he graduated in 1984. At age eighteen, Jeff followed his dream of joining the Easton Volunteer Fire Department. He served first as an engineer and line officer, and later became president. Following college, Jeff worked for Noble Motor Rebuilders in Easton. In 2000, Jeff joined Warren’s Woodworks and served as vice president and later department manager. He continued to work for Warren’s and remained a trustee of the EVFD until his passing. Jeff married his high school sweetheart, Mandy Langford, on November 5, 1988, at St. Mark’s United Methodist Church in Easton. They were married 33 happy years. Like the Easton Volunteer Fire Department motto, Jeff lived a life of “service for others.” He was a volunteer coach for Easton Little League, where he served as past president. He helped coach St. Michael’s high school baseball for ten years. Jeff was also a member of the Easton B.P.O Elks #1622. He served on Talbot County Parks and Recreation Advisory Board and the Town of Easton Park Advisory Board. Jeff was a lifelong member of Sts. Peter and Paul Catholic Church, where he served as an altar boy in his youth. Jeff is survived by his wife, Mandy, his two beloved sons, Adam (Kate) and Seth, his parents Ellis and Patricia Parks, his sister Carole Ann Clem (Warren), and their children, Graydon and Allison, all of Easton, as well as his beloved Lab, Tug. He was preceded in death by his grandparents; William Nick and Doris Favinger and Charles and Minnie Esther Parks, of Easton. Friends and family may call at Fellows, Helfenbein & Newnam Funeral Home P.A, 200 S. Harrison St., Easton, on Sunday, October 31, from 2 to 4 p.m. On Monday, November 1, a Funeral Liturgy will be celebrated at 1 p.m. at Sts. Peter and Paul Catholic Church, 1210 S. Washington St., Easton. Burial will follow at the New Spring Hill Cemetery, Easton. In lieu of gifts, the family asks that donations be made to the Easton Volunteer Fire Department, 315 Leonard Rieck Drive, Easton, MD 21601 or Talbot Hospice, 586 Cynwood Drive, Easton, MD 21601.

The family of C. Jeffrey Parks created this Life Tributes page to make it easy to share your memories.

Send flowers to the Parks family.