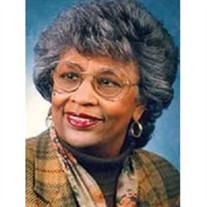 Dr. Bernardine M. Lacey, 88, of Grasonville, passed away on March 26, 2021 in Grasonville, MD. Dr. Bernardine M. Lacey was born Vicksburg, Mississippi to Leroy Jackson and Katie Mae Williams on July 28, 1932. She earned her diploma in Nursing from the Gilfoy School of Nursing, Mississippi Baptist Hospital in Jackson, MS; her BSN from Georgetown University in Washington, DC; her MA from Howard University and her Doctor of Education Degree from Teachers College at Columbia University in New York, NY. She married Dr. Wilbert Lacey (deceased) from Howard University a psychiatrist for the Howard University Counseling Center. Dr. Lacey has held many positions in nursing from the bedside to the boardroom. She has served in many institutions including Howard University, Western Michigan University, Prince Georges Community College, Children’s National Medical Center, Bowie State University, and Delaware State University. Over the course of her career, Lacey has held leadership positions, including founding dean and professor at Western Michigan University’s school of nursing in Kalamazoo. She has served as special assistant to Marian Wright Edelman at the Children’s Defense Fund in Washington, DC, and received numerous awards, including an endowed chair named in her honor at Western Michigan University. Lacey became a fellow of the American Academy of Nursing in 1990 and a Living Legend of that organization in 2014, and she was awarded the prestigious R. Louise McManus Medal from the Nursing Education Alumni Association of Teachers College, Columbia University, in 2015. She has also received well over $2 million in grants to develop programs such as nurse-managed centers for those living in homeless shelters and for educational support of diverse students in nursing. Dr. Lacey is survived by her children Amando Gomes and his wife Dorothy Gomes, Elthon Mays, and Jacinta Mays: her grandchildren Sean Mays and his wife Cassidy Mays, Jordan Bates and her husband Les Bates: and her great-grandchildren Sean Mays Jr., Caysen Mays, Austin Bates and Brixton Bates. At this time there are no funeral services scheduled. A funeral service will take place in the future, with burial at Arlington National Cemetery.

The family of Bernardine Mays Lacey created this Life Tributes page to make it easy to share your memories.

Dr. Bernardine M. Lacey, 88, of Grasonville, passed away on March...

Send flowers to the Lacey family.