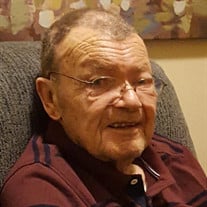 Alfred James Bennett, Easton, MD, and Port Orange, FL, died on September 15th, 2021, at Candle Light Cove. He was 94. Born in Port Jervis, N.Y., June 28, 1927, he was the son of Winford Cate and Bessie Belle Horton Bennett. After graduating from high school, he joined the U.S. Navy and served in the South Pacific aboard the submarine SS 327, Boarfish, during World War II. Following his release from active duty, he attended Newark College of Engineering. He moved to Easton in 1955 where he worked as a National Manufacturer’s Representative for the Marine Industry, retiring in 1992. While living in Easton, he was a member of the First Baptist Church, the Eason Lions Club and served on the Easton Memorial Hospital Board of Directors. He was also a member of the Holland Club which is an association of submariners with over 50 years affiliation. A pilot since 1948, he was a member of the Quiet Birdmen, an aviation fraternity of which he had been a member since 1996. Mr. Bennett and his wife, the former June L. Hartt whom he married on July 27, 1946, moved to Florida to make their home in 1995. Surviving, in addition to his wife, are a daughter, Patricia A. Bent and her husband, James, of Easton, MD; two sons, Richard A. Bennett and his wife, Mildred, of Elm City, NC and Bruce S. Bennett of Easton, MD; three grandchildren, Christopher A. Bennett, Bryan W. James and Matthew B James; and six great-grandchildren. He is predeceased by his son, Alfred J. “Skip” Bennett, Jr. died on Dec. 26, 1979. A graveside service will be held at the Oxford Cemetery, Oxford, MD on Monday, September 20, 2021, at 11:30 am. Those wishing to make donations in his memory may do so to: USSVI – United States Submarine Veterans Incorporated; Talbot Hospice, 586 Cynwood Drive, Easton, MD 21601; or Crossnore Avery Campus, PO Box 249, Crossnore, NC 28616-0249

The family of Alfred James Bennett Sr. created this Life Tributes page to make it easy to share your memories.

Send flowers to the Bennett family.