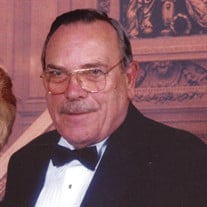 It is with a heavy heart that we announce the sudden passing of Alfred Ferdinand Aus, Sr. on Sunday, February 27th at his home. He was 85. Born in New Freedom, PA on July 24, 1936, he was the son of the late Edward and Jennie Aus. Al grew up in Ft. Howard, MD and graduated from Sparrows Point High School in 1954 where he met the love of his life, Gerry. They were married in 1957, he was then drafted by the Army in 1959 and was stationed in Germany where they had their first child Pam in 1960. They returned to Dundalk, MD in 1961, shortly before giving birth to their second child Al Jr. In 1967 their second son Kevin was born. They enjoyed many summers at Taylors Island camping, crabbing, and fishing. Al served his electrical apprenticeship at Bethlehem Steel and later joined Local 24 IBEW. In 1985, he and his wife started Alason Electrical Contractors Inc. Three years later, in 1988 they built their dream home on the Wye River of the Eastern Shore, MD where they resided until their passing. Al was an active member of the American Legion Post 296 where he served on the board until 2018. As a member, he was known for his Spaghetti dinner fundraisers, generously donating time, funds, and labor to help expand the Legion. His greatest joys were spending time with his family and friends at their home, crabbing on the Wye River, hunting, fishing, gardening, watching the Orioles and annual family cornhole tournaments. Al is preceded in death by his wife Gerry of 64 years, brother Ed, sisters Elsa, Anna, and Celeste. He is survived by his daughter Pamela Newman (Ray) of Glen Burnie, MD, sons Alfred Aus Jr. (Linda) of Chester, MD and Kevin Aus of Centreville, MD; brothers Robert and Fred, sisters Mary, Francis, Patricia, and Susan; six grandchildren: Christina, Jamie (Teddy), Laura (Josh), Andrew, Cady, and Rachel (Nicholas); eight great-grandchildren: Olivia, Robert, Alyssa, EJ, Cole, Madison, Luca, and Gabriella. A visitation will be held on Thursday, March 3rd 2:00-4:00 and 6:00-8:00 at Fellows, Helfenbein & Newnam Funeral Home, P.A. in Chester, MD. A funeral mass will be held on Friday, March 4th at 11am at St. Christopher’s Catholic Church in Chester, MD. Military burial to follow in St. Peter’s Catholic Cemetery in Queenstown, MD. Contributions in his memory can be made to Compass Regional Hospice 160 Coursevall Drive, Centreville, MD 21617.

It is with a heavy heart that we announce the sudden passing of Alfred Ferdinand Aus, Sr. on Sunday, February 27th at his home. He was 85. Born in New Freedom, PA on July 24, 1936, he was the son of the late Edward and Jennie Aus. Al grew... View Obituary & Service Information

The family of Alfred Ferdinand Aus created this Life Tributes page to make it easy to share your memories.

It is with a heavy heart that we announce the sudden passing...

Send flowers to the Aus family.