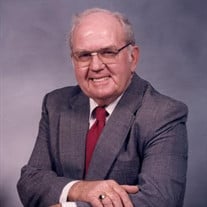 William Cook White of Centreville, MD peacefully departed on February 8, 2022. He was 97 years old. Born in Kent Island at White’s Heritage on March 9, 1924, he was the son of Marmaduke Goodhand and Nellie Matilda Cook White. In his younger years he worked with his father on their farm and on the water. He then was employed with Maryland State Roads where he was a contributor in building and paving Rt. 50 highway. He then pursued his dream to go back to his roots of working on the water and continued this profession for 50 years until retirement. William known as Captain Bill spent his retirement days perfecting his hobby of carving handmade wooden boats as he did when he was young with his grandfather and from memory of various boats on the water. He also enjoyed building a variety of birdhouses for his yard and for his children. William was a charter member of Grasonville Church of God and Centreville Church of God whom his wife Betty had founded and a member of the Centreville United Methodist Church. He is preceded in death by his parents, Marmaduke G. and Nellie M. White, three brothers, Robert, John and Harold White and his beloved wife of 33 years Betty Ruth (Horney) White. Also, his second wife Charlotte Ann (Collison) White. He is survived by five children, Ruth Ann Cecil (Gene), Sharon F. Palmatary (Harvey), Linda J. Cecil (Gary), Tanis L. Duckery and William M. White (Reyna). He was also blessed with 14 grandchildren, 15 great grandchildren, 4 great, great grandchildren and a host of nieces and nephews and friends. A viewing will be held on Friday, February 11, 2022 from 11 am to 12 noon at the Fellows, Helfenbein & Newnam Funeral Home, 106 Shamrock Road, Chester, MD. Funeral services will begin at 12 noon. Graveside services will be private.

William Cook White of Centreville, MD peacefully departed on February 8, 2022. He was 97 years old. Born in Kent Island at White&#8217;s Heritage on March 9, 1924, he was the son of Marmaduke Goodhand and Nellie Matilda Cook White. In his... View Obituary & Service Information

The family of William Cook White created this Life Tributes page to make it easy to share your memories.

Send flowers to the White family.