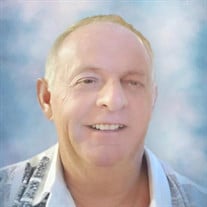 William Randall Purnell, “Randy,” of Felton, DE, was called home to be with Jesus on Saturday, December 18, 2021. He was 62. Born in Chestertown, MD on March 20, 1959, he was the son of the late Elmer Randal Purnell and Clara Virginia Purnell. He attended public school in Queen Anne’s County, MD. Randy visited 46 states as an over-the-road truck driver in his early adulthood prior to working as an auto mechanic. He was employed for a number of years with Hickman Overhead Door Company in Milford, DE but had transitioned to a career in construction, home improvements, and repairs, specializing in the details. Randy was a self-described “Jack of all trades, master of none,” but those who knew him best believed he was the fixer of all things. In his spare time, Randy loved spending time near the water and most enjoyed fishing, as well as feeding the wildlife in his own backyard. In recent years, he attended Harmony United Methodist Church where he had been accepted into the church family. Randy is survived by his wife, Tamera L. Purnell; his brother, Danny Lee Purnell of Raeford, NC; his sister, Lou Ann Justice and her husband Junior of Dover, DE; daughter, Carolynn Murphy and her husband Allan of Greensboro, MD; daughter, Melissa Kraus and her husband Neil of Hamilton, VA; step-daughter Kaitlin Norris and her husband Josh of Hartley, DE; step-daughter Taylor Kelley of Claiborne, MD; 7 grandchildren: Jacob Rogerson and Garrett Stamper of Geneva, OH; Kayden, Preston, and Oakleigh Kraus of Hamilton, VA; and Caleb and Avery Norris of Hartly, DE. In addition to his parents, he was preceded in death by his son, Brandon William Purnell in 2016. A Celebration of Randy’s life will be held on Saturday, January 8th, 2022, at 2:00 pm at Harmony United Methodist Church, 6221 Bethlehem Road, Preston, Maryland 21655. In lieu of flowers, memorial contributions may be made to Harmony United Methodist Church, P.O. Box 145, Preston, MD 21655.

The family of William Purnell created this Life Tributes page to make it easy to share your memories.

Send flowers to the Purnell family.