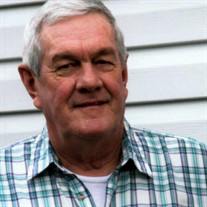 William “Billy” Ernest Hepbron, Jr. passed away on April 19, 2022 at his home in Rock Hall, MD, surrounded by his loved ones. He was 79. Billy was born in Chestertown, MD on December 2, 1942 to William Ernest and Nora Virginia Hepbron. He grew up on his grandparent’s farm in Rock Hall and graduated from Rock Hall High School in 1960. After graduating, he enlisted in the National Guard and served for seven years. He met and married Nancy Hubbard in 1967 and the two had a beautiful daughter. Once he retired from the service, he went on to work as a waterman and eventually, returning to his agricultural roots, worked as a farmer. Billy was a quiet man who enjoyed gardening and tending his prized lima bean patch. He was preceded in death by his stepson, David Elburn. He is survived by his daughter, Denise Hepbron; sister, Frances Williams; brother, Frank Hepbron (Gail); stepson, Danny Elburn; grandchildren, Beth, Jessica, Hillary, Zachary, and Andrew; great-grandchildren, Colby, Alyssa, Calumn, Liam, Layla, and Jaxon; and one great-great-grandchild, Ryland; as well as many cousins and dear friends. Services will be held on Wednesday, April 27 at 12:00 pm at Fellows, Helfenbein, and Newnam Funeral Home in Chestertown. A visitation will be held one hour prior from 11:00 am to 12:00 pm at the funeral home. Interment to follow in Wesley Chapel Cemetery. In lieu of flowers, memorial donations may be made to the Rock Hall Volunteer Fire Company at P.O. Box 367, Rock Hall, MD 21661.

The family of William "Billy" Ernest Hepbron Jr. created this Life Tributes page to make it easy to share your memories.

Send flowers to the Hepbron family.