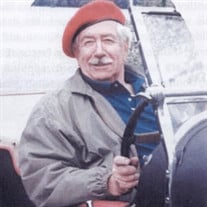 William James Ford, “Bill”, died on Saturday, July 31, 2021, at Talbot Hospice House in Easton, Maryland. He was 97. He was born on December 31, 1923 in Philadelphia, PA, the son of the late William Joseph Ford and Jessie May Anderson Ford. Bill graduated from Frankford High School. He served proudly in the U.S. Navy. Bill then attended night school at the Wharton School of Business at the University of Pennsylvania and Temple University in Philadelphia. He married the former Mary Andrews on November 13, 1971 in Elkton, MD. They made their home in Worcester Township in PA, before moving to Easton in 1998. Bill founded and owned De-Pen Line Motor Freight in Phoenixville, PA, and retired in 1994. Bill was a member of Safe Harbor Presbyterian Church in Stevensville, MD, the Faith Church of Worcester in Worcester, PA, Christ the King Presbyterian Church in Vero Beach, FL, and Shore Harvest Presbyterian Church in Easton, MD. He was a member of the Mason’s 33rd Degree in Allentown, PA, the Rolls-Royce Owners’ Club, and the Bentley Drivers’ Club. He is survived by his wife, Mary Andrews Ford, his daughter, Doreen Ford of Pasadena, MD; grandchildren, Lauren Pierce, Jenna Chase and Elizabeth Mang; great-grandchildren, Elijah Pierce, Hudson Pierce, Kelvey Pierce, Brinton Pierce, McKinley Pierce, Lindsay Chase, and Sara Savannah Chase. In addition to his parents, he was preceded in death by his daughter, Donna Lee Ford Mang. A funeral service will be held on Monday, August 9, 2021, at 11AM at Shore Harvest Presbyterian Church 9560 Black Dog Alley, Easton, MD 2160. A visitation will be held one hour prior from 10-11AM. Burial will follow at Washington Memorial Chapel in Valley Forge, PA. In lieu of flowers, memorial contributions can be made in Bill’s honor to: Shore Harvest Presbyterian Church https://www.shoreharvest.org/giving.

The family of Mr. William "Bill" James Ford created this Life Tributes page to make it easy to share your memories.

Send flowers to the Ford family.