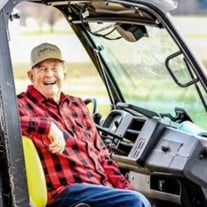 Willard Borman Boone, age 80, of Church Hill, Maryland passed away October 5th, 2021, in his home surrounded by his loved ones. Willard Boone was born June 15th, 1941, in Queenstown, Maryland, moving to Church Hill when he was just 6 months old. He attended and graduated from Centreville High School in 1959. He began working on his family farm and met the love of his life in 1964, Janet Lorraine Cannon and married June 20th, 1968. They spent 53 amazing years together. Willard Boone is survived by his wife, Janet Boone of Church Hill, Maryland, along with his siblings Barbara, Charles and Joseph. He is also survived by his children Amy M. Dawkins (Chris), Steven B. Boone (Trish), and Kevin S. Boone Sr. (Jordan), as well as his grandchildren Jordan (Lillian), Justin (Kylei), Bradley, Brendon (Sara), Brice (Julia), Emma, Colin, Megan, Corey, Kevin Jr., Kennedy, and Kensley. He was preceded in death by his parents Clara and Charles Boone, his sister Edith, brother George, and brother John. He belonged to Price Bethany Church and Price Community Center, was a member of the farm bureau and Eastern Shore Holstein Association, and a member of the Land O’Lakes Co-op for over 50 years. He owned and operated Boone Brothers Dairy with his brother John for over 50 years, milking over 180 Holsteins and tilling over 300 acres, and selling hay and straw to his loyal customers on their second-generation farm. His passions included milking cows, farming, attending the local fairs, watching his children and grandchildren farm, and was a sucker for a family picnic and a good bowl of ice cream. Family and friends are invited to attend a visitation on Sunday, October 10, 2021 from 6-8 pm at the Fellows, Helfenbein & Newnam Funeral Home, P.A. in Centreville, MD, where a service will be held on Monday, October 11, 2021 at 11 am. Burial will follow in Chesterfield Cemetery. In lieu of flowers, the family requests that donations be made to Price Community Center, 121 Rabbit Hill Road, Church Hill, MD 21623 and New Freedom Church, PO Box 164, Church Hill, MD 21623.

Willard Borman Boone, age 80, of Church Hill, Maryland passed away October 5th, 2021, in his home surrounded by his loved ones. Willard Boone was born June 15th, 1941, in Queenstown, Maryland, moving to Church Hill when he was just 6 months... View Obituary & Service Information

The family of Willard Borman Boone created this Life Tributes page to make it easy to share your memories.

Send flowers to the Boone family.