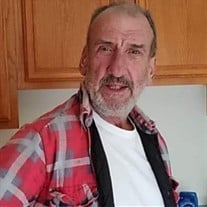 Walter Dennis Messick of Chestertown, MD died on April 12, 2022 at Anne Arundel Medical Center in Annapolis. He was 66 years old. Walter "Denny" Messick was born in Milford, DE on September 18, 1955 to the late Preston John Messick and Evelyn Irene Hammond. He was a retired merchant marine captain, carpenter, and furniture refinisher. He enjoyed golfing, football, softball, and bowling, as well as fishing, crabbing, and playing music on his guitar with his friends. He also loved to shoot pool. He was an amazing home chef, always cooking up a special Sunday meal for his wife and sons. He was a member of the Chestertown Elk’s Lodge #2474, American Legion Post 246 in Betterton, and AFL-CIO Union. Denny was a loving husband, proud father, and a good friend. He loved animals, especially his German shepherd Heineken, and cats Whitie and Dasha. In addition to his parents, he was preceded in death by a daughter, Angilena "Andie" Pinder. He is survived by his wife, Michele Hoy Messick; his sons, Jensen Messick of Easton, and Jusden Messick of Chestertown; brothers, Alan Messick of Dover, DE, Robert Messick of Chestertown, Gary Messick of Rock Hall, and P.J. Messick of Harrington, DE; sisters, Constance Hickman of Chestertown, and Christine Petrone of Greenwood, DE; stepbrothers, Zeke Larrimore of Betterton, Dicky Larrimore of Chestertown, Charlie Larrimore of Chestertown, Ricky Austin of Chestertown, and Mike Austin of Sudlersville; stepsisters, Diane Jacobs of Betterton, Gail Daneker of Crownsville, Sue Austin of Kent Island, Kathy Kellun of Martinsburg, WV, and Adrian Rouse of Montrose, VA; grandchildren Bobby Jr., Brianna, and Braydon Pinder; and many beloved nieces and nephews. Denny will be interred privately at a later date at St. Paul's Kent Episcopal Church. In lieu of flowers, donations may be made to a charity of your choice.

The family of Walter Dennis Messick created this Life Tributes page to make it easy to share your memories.

Send flowers to the Messick family.