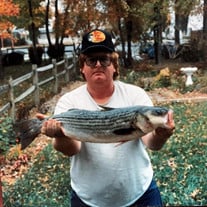 Vincent John Paul Scalco Sr. "Big John", age 64, peacefully passed away on February 26, 2021, surrounded by his family. John was born on May 2, 1956, in Washington, D.C. to the late Vincent Joseph Scalco and the late Betty Ann Scalco (Proctor). John was a DeMatha Catholic High School graduate class of 1974, and had a career in underground utility work. John, a devoted and beloved husband, is survived by Cheryl, his wife of thirty-two years, his children Vincent Jr., Elizabeth, Samuel and partner Katie Kennedy, and granddaughter Amelia. John, the oldest of nine children was raised in Maryland City (Laurel, Maryland), where he played several sports and coached rec basketball. In 2006, John relocated his family to the small town of Stevensville on the Eastern Shore. John was a history and movie buff, an avid music lover, and enjoyed going to many concerts over the years. He loved the beach, fishing, the outdoors, and especially loved visiting his property in West Virginia. John enjoyed talking on the phone with his cousins. In addition to his parents, John was preceded in death by his brothers Joseph, Roy, Nicholas and nephew Robert. John is survived by his siblings Steven (Valerie), Bobby (Judy), Teresa Crider (Chris), Dora (Chisa), Michael Scalco (Sandi), and sisters-in-law Mary, Pam, and Amy, as well as numerous nieces, nephews, and cousins, all of whom will miss him dearly. In lieu of flowers, donations can be made in honor of Vincent John Scalco Sr. to: Kent Island Volunteer Fire Department. Funeral services will be private.

The family of Vincent John Scalco Sr. created this Life Tributes page to make it easy to share your memories.

Send flowers to the Scalco family.