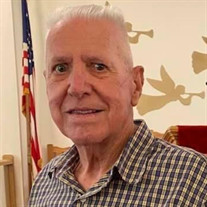 Thomas James Coleman, Sr. (Tom, Tommy) of Collegedale, TN formerly of Sudlersville, MD lost his battle to colon cancer on February 16, 2022. He was 88 years old. Tom was born on April 26, 1933 in Rock Hall, MD and was proud of his roots. He followed in his father’s footsteps and built or re-modeled many homes in the area and constructed commercial buildings as well. As a young man he proudly served in the United States Army’s Operation Whitecoat where he participated in the development of vaccines. He also helped train the chimpanzee who traveled to space. Many locals remember him as an outstanding ball player. He was even offered a position with the White Socks which he turned down because of his commitment to his faith. He refused to play on Sabbath. He never regretted his decision, but continued to play for the love of the game. He was most proud of his Rock Hall uniform. For many years he was an active member of the Chestertown Seventh Day Adventist Church where he held many positions for both the Church and Church School boards. Tom had a sand art ministry not only at the beach, but even at the church! He was known as an expert coin collector and had a coin shop in Kingstown for many years. He would continue this passion right up to the end. He is preceded in death by his parents James Wesley Coleman and Naomi Thomas Coleman, his wife of 56 yrs, Dolores Anne Coleman, his eldest son Thomas James (Jamie) Coleman, Jr and 2 grandchildren Michael Charles Cohey, Jr. and Brooke Leah Knapp. Tom is survived by 2 sisters Lois Townsend of Chestertown, MD and Geneva Gatling of Placerville, CA. and by his children Jerry Coleman (wife Joyce) of Chestertown, MD, Deb Duphily (husband John) of Carnesville, GA and Kevan (wife Betsy) of Arrowsic, ME. Timothy Coleman (wife Nancy) of Dover, DE, Josh Coleman of Benton Harbor, MI, and Dianna Knapp (husband Ron) of Apison, TN, he is also survived by 14 grandchildren; Beth Pinder, Jeremy and Scott Coleman, William and Tyler Coleman, Chris Coleman, Brandi McGough, Michelle Laux, Tara Clark, Seth and Maddy Coleman, Braden, Eden and Caden Knapp, and by 18 great-grandchildren and an "adopted grandchild" Todd Rhoades. He also leaves behind his wife Patricia Bullock Coleman. A Celebration of Life will be held Saturday, February 26, 2022 at Fellows, Helfenbein & Newnam Funeral Home 130 Speer Road, Chestertown, MD 21620. Visitation will begin at 1:00 pm Service at 2:00 pm. and the internment at the Wesley Chapel Cemetery, Rock Hall, MD Memorial donations may be sent to the Chestertown Seventh-Day Adventist Church. 305 N. Kent Street, Chestertown, MD 21620.

Thomas James Coleman, Sr. (Tom, Tommy) of Collegedale, TN formerly of Sudlersville, MD lost his battle to colon cancer on February 16, 2022. He was 88 years old. Tom was born on April 26, 1933 in Rock Hall, MD and was proud of his roots. He... View Obituary & Service Information

The family of Thomas James Coleman Sr. created this Life Tributes page to make it easy to share your memories.

Send flowers to the Coleman family.