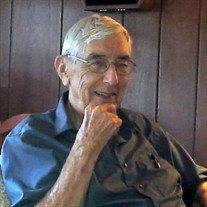 Thomas Edmund Nelson, Jr. “Blue” of Centreville, MD passed away at his home on November 25, 2021, peacefully surrounded by his family. He was 96. Born on October 22, 1925, in Centreville, MD, he was the son of the late Thomas E. Nelson, Sr., and Bertha Parks Nelson. Blue was a graduate of Centreville High School, Class of 1942. After graduation he joined the US Navy in 1943 and was a member of the Fleet Airwing II Torpedo Squadron. While serving in Guam he worked for the Navy News as a photographer and was honorably discharged as a US Navy Ensign- Photographer’s Mate 2nd Class. In 1947 he opened the first self-serve grocery store “Community Store” with James E. Reynolds in Centreville. The store had a bakery on site and was located on Water Street. The store was the first to sell English Muffins, frozen food and was the only store selling Arnold Bread. In 1948, Blue joined the Maryland State Police Force. He married Jane Baker Downes on September 19, 1953, and they had two children, Amy Downes Nelson Leach (Ray Swincki) and Jill Parks Nelson Davis (Dale). In 1956, Blue went to work in the family business, Downes Music Company, until his retirement in 1991. After his retirement he explored his passion of woodworking, making numerous pieces of furniture for friends, relatives and for auctions at fund raisers. His furniture can be found in homes from Michigan to Georgia. He was a member of the Lions Club, American Legion, and the Navy League Eastern Shore Board of Directors. Highlights of his later years included guest of Atlantic Fleet Vice Admiral Albert Konetzni to Christening of USS Ronald Regan, USS Virginia and invitations to the Supreme Court Christmas Party and unveiling of Clerk of Supreme Court Michael Radak portrait. Blue enjoyed building various model ships and moved into RC planes in later years. He was a lifetime resident of Centreville. In addition to his two daughters, Amy Leach and Jill Davis, he is survived by his second wife Elizabeth Kirby “Betty” McGlashan Nelson; 5 grandchildren and 6 great grandchildren. He was preceded in death by his first wife Jane Nelson on March 5, 2002. A visitation will be held on Tuesday, November 30, 2021, from 12-1 pm at Fellows, Helfenbein & Newnam Funeral Home, P.A. in Centreville, MD, with a Graveside service beginning at 1 pm in Chesterfield Cemetery. In lieu of flowers, donations may be made to Compass Regional Hospice, 160 Coursevall Drive, Centreville, MD 21617, the Maryland Troopers Association https://mdtroopers.org/donate/ or to the charity of your choice.

The family of Thomas "Blue" E. Nelson Jr. created this Life Tributes page to make it easy to share your memories.

Send flowers to the Nelson family.