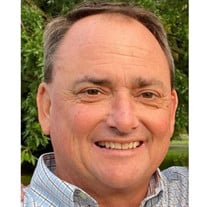 Steven Charles Sweiderk, 52, of Queenstown, MD passed peacefully on Saturday January 22nd, 2022, held in the warmth and love of his wife and daughter after an arduous and heroic health battle. Steven Sweiderk was born on April 5th, 1969 in Atlantic City, NJ to Robert J. Sweiderk, Sr. and Stephanie Shurko. Growing up, Steven was active in a wide assortment of sports, though his favorites were golf, wrestling, and football. One of Steve’s proudest moments was kicking his 1986 game-winning field goal, leading the newly established Egg Harbor Township High School football team to its first victory. As a young teenager, Steve met his best friend and high school sweetheart, Kelley. Their unique bond and timeless love has carried throughout their youth, marriage, parenthood, and beyond. After studying Turfgrass Management at Cook College of Rutgers University, Steve married Kelley on March 9th, 1991. The pair migrated through New Jersey, Virginia, and Maryland following Steve in his Golf Course Superintendent career, ultimately settling on the Eastern Shore of Maryland where they raised their children, Allyson, Cole, and Ryan. Steve continues to be regarded by his children as an affectionate and selfless mentor and father; the true definition of a dad with a heart of gold, never missing a game or performance. Though first and foremost a family man, when not at home or working hard Steve could be found on the golf course or fishing and boating on the Chesapeake Bay. Steve is treasured by the community as a coach, friend, and unofficial “mayor;” perpetually spreading his unending happiness and energy to everyone he meets. He lived by the lyrics of his favorite song, truly embodying what it means to be “Humble and Kind.” Steve is predeceased by his mother, Stephanie Shurko; his brothers Robert J. Sweiderk, Jr. and Jared Sweiderk; and his grandparents Charles and Veronica Sweiderk and Stephen and Josephine Shurko. Steve is survived by his beloved wife, Kelley (Henry) Sweiderk; his daughter, Allyson Sweiderk; his twin sons, Cole Sweiderk and Ryan Sweiderk; his father, Robert J. Sweiderk, Sr. and step-mother, Linda (Collins) Sweiderk; his sisters Amy Sweiderk-Ross (Sean) and Emily Sweiderk; loving in-laws, aunts and uncles, cousins, nieces and nephews, and a host of longtime friends. An immediate private service will be held in the days to come followed by a Celebration of Life reflective of Steve’s humility and joy in the spring.

Steven Charles Sweiderk, 52, of Queenstown, MD passed peacefully on Saturday January 22nd, 2022, held in the warmth and love of his wife and daughter after an arduous and heroic health battle. Steven Sweiderk was born on April 5th, 1969 in... View Obituary & Service Information

The family of Steven Charles Sweiderk created this Life Tributes page to make it easy to share your memories.

Send flowers to the Sweiderk family.